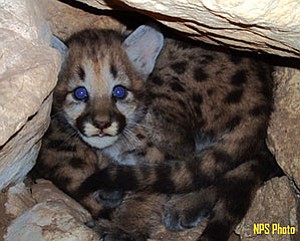 An attempt will be made in a year to recapture these kittens after they have grown large enough to wear a radio collar. These kittens will provide important information on dispersal and movements of mountain lions with origins inside of the park.

Since November of 2003, 16 adult mountain lions have been captured and radio collared inside Grand Canyon National Park. Nine of these lions (six males and three females) are still collared and being monitored by park staff. The purpose of this research is to monitor how lions use the park and surrounding lands, including the Kaibab National Forest. The research will also provide information on how mountain lions interact (or most often choose not to interact) with humans and how human infrastructure affects them.

To date there have been no threatening encounters by lions in the study. However, humans have been responsible for four mountain lion deaths within the past two years - two from vehicle collisions inside the park and two that were legally hunted outside of the park boundary. Another collared mountain lion died due to natural causes. Park biologists have also lost contact with two previously collared lions. It is believed that one collar fell off and the other collar failed. The fate of these two lions is unknown.

Although there has never been a mountain lion attack at the Grand Canyon, there have been lion sightings.

The following suggestions may help prevent a mountain lion encounter:

· Hike in a group and make noise.

If you encounter a mountain lion that does not immediately retreat, follow the steps below:

· If you have small children, pick them up.

· While facing the lion, back away slowly; do not run.

· Look big and make a lot of noise - let the lion know you are a human.

· If the lion is not backing away, throw rocks and sticks at it to scare it off.

Please report all mountain lion sightings to a ranger.