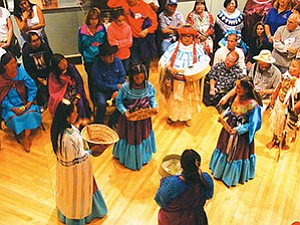 Diana Sue Uqualla drums as young Havasupai girls perform a basket dance. The young woman at the bottom of the photo is holding a basket of sage to use in blessing the exhibit and the people who have attended the event (Photo by S.J. Wilson/Observer).

GRAND CANYON-The balcony and stairs overlooking the auditorium of the Grand Canyon National Park's Kolb Studio groaned under the weight of an additional 20 to 30 people trying to make their way around the exhibit floor.

Four young Havasupai girls stood in a circle, a fourth dressed in buckskin stood slightly to one side. Diana Sue Uqualla, teacher and mentor, held a drum, accompanying herself in a basket dance song. Surrounded by the security blanket of their tribal elders, the girls danced for visitors from many nations, many countries. After the basket dance, the girls wove graceful designs in the air-sign language to a song for Brother Eagle.

The intricately woven beaded capes and long, full satin skirts worn by the dancers swayed rhythmically to the music. The girls danced barefooted, perhaps as a sign of humility grounding them to the earth despite the vibrant finery all wore.

Uqualla introduced the Eagle prayer song, explaining that a Havasupai singer had gifted the song to the group for their use that night.

As the dances of the maidens ended, Uqualla told the gathering that the girls had performed an important responsibility.

"This is a heritage of respect that we have bestowed on the children," Uqualla said. "They have sprinkled sage, bringing a blessing on each and every one of you. Children represent innocence. They will leave this place knowing that they have honored their people."

Behind the swell of people, the walls are graced with historical and contemporary photographs of the people and world of the Havasupai hung silently watching. Historical information accompanying the pictures briefly outlined the history of the proud People of the Blue Water.

Part of this history includes the diminishing land base heralded by the arrival of the Europeans that began the slow evaporation of their ancestral lands. The tribe's struggle to regain their ancestral land is also documented-and the battle continues to this day.

The Havasupai people have lived a quiet, largely unseen, existence in their canyon home in Supai Village. But on the night of July 31, members of the tribe emerged to stand on what was once part of their traditional territory. It was a very emotional experience.

The voice of Stanley Manakaja, the traditional leader of the Havasupai, trembled with emotion as the thanked the Grand Canyon Association for hosting the exhibit "I Am the Grand Canyon: The Story of the Havasupai People" in the historic Kolb Studio-originally a tent pitched by the Kolb brothers at the head of the Bright Angel Trail in 1903.

"We are gathered here now," Manakaja said. "This is the first time I ever saw something like this happen before. We are sitting here on our old stomping grounds. Our ancestors roamed this land, this very place, hunting and gathering food and wood.

"At one time we lived on the plateau, but the federal government kept moving us down, pushing us down into our little Canyon home, Supai Village. We now have about 500 acres," Manakaja estimated.

Manakaja implored non-Havasupai visitors to return to their own homes throughout the world and tell other people about their struggle to regain ancestral lands.

Manakaja said that he considered it an honor to be invited into the Grand Canyon National Park-despite its part in the history of land removal from the Havasupai-and the Kolb Studio.

The elders announced their intention to dance to honor the exhibit. A line of brightly dressed women follow Rex Tilousi, another tribal leader. Their clothing was the as the girls'-long beaded netted capes, highly prized by their wearers, and long, bright satin skirts, blouses, and scarves worn as shawls.

"Thank you all for coming," Tilousi said in introduction. "I am a member of the proud Havasupai people."

Tilousi drew laughter as he described himself as a man with many hats.

"People look up to me as a leader; I feel their respect and I try to give them what they give to me, that respect," Tilousi said. "I too am proud to say that I am a park ranger. I wear the green and grey uniform of the park ranger. Why do I wear the uniform? I feel it is time for the Havasupai people to share their songs, their arts, and their history.

"You see the paint we wear on our faces? This is red paint made from the red rocks . Wearing the red paint connects the Havasupai people to the rocks. It is our umbilical cords connecting us to the rocks.

Tilousi described the movements of the bird dance about to be performed by the elder women and Miss Havasupai, Heather Uqualla.

"We see many birds around us," Tilousi said. "They scratch for food and hop around."

This movement, he said, is copied by the dancers.

Coleen Kaska, who sits on the Havasupai Tribal Council, thanked the Grand Canyon Association and Stephen and Lois Hirst for putting on the exhibit.

"This exhibit tells our history, tradition and culture," Kaska said. "It is an honor to be here among the elders. I know also from my elders that you don't want to forget your culture. They tell us that you can always come back to where you were born.

"Our traditional lands used to stretch from Seliman, Ash Fork, Williams and Flagstaff," Kaska continued. "Some of those used to be our hunting areas. We keep our tradition alive. This recognition of our people has been a long time coming. My people deserve respect."

Kaska choked back her own tears as she spoke of standing at the edge of the Canyon down onto Indian Gardens.

"Indian Gardens are no longer open to us. We are left looking down on that area from the rim and wonder about how life was before," Kaska added. "We want to continue our culture to survive. We need to be recognized more."

Steve and Lois Hirst were honored during the event, and later Hirst signed copies of his book "I Am the Grand Canyon: The Story of the Havasupai People." Though he remained a presence throughout the event, Hirst told attendees that the evening was "not about my book."

Hirst had generously signed the copyright of the book and all royalties to the Havasupai people.

Pam Frazier retired from the Grand Canyon Association after 18 years of service, but she continues to oversee the exhibits program on a contractual basis. She shared credit for planning and hanging the exhibit with Hirst.

"Steve was essential to making this work."

Frazier said that the Grand Canyon Association (GCA) was founded in 1932, and is celebrating its 75th Anniversary.

"The GCA earns income by operating the bookstores, and assists the park in various capacities," Frazier said. "We refurbished this building over a decade ago, and when it was finished, the Park Service Supervisor asked us to propose a use for the auditorium, and we proposed the changing exhibits program. We accept proposals as long as they are in our scope, focusing on the Grand Canyon, stories and visions from the area."

Frazier said that a committee of people from the Park Service and the GCA review proposals and select those with educational value and variety.

When asked how the committee came to select the Havasupai exhibit, Frazier again credited Hirst.

"Actually Steve Hirst published his book and it was so well received that Steve proposed doing an exhibit version."

Frazier said that she had enjoyed working with the Havasupai people in designing the exhibit.

"They were all welcoming, warm and open. I didn't know what to expect, but it was wonderful to work with them."

Frazier praised Hirst for the gift to the Havasupai of the copyrights and royalties from the book, and announced another gift.

"When the exhibit is finished here, it may travel to some other museums, but ultimately the entire exhibit will be donated to the tribe where it can become part of their own museum, or whatever purpose they might

The exhibit, "I Am the Grand Canyon: The Story of the Havasupai People" will run through October 31."