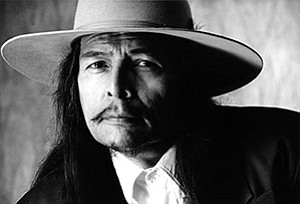 FLAGSTAFF-W.B. Franklin sits at a large bank of windows in his studio. He is surrounded by dozens of paintings, a typewriter as opposed to a computer, and shelves of books as complex and diverse as their owner. It has been less than a week since the Navajo festival at the Museum of Northern Arizona, where Franklin's painting, "Morning Blessing Songs-Our Inheritance," took the Best of Show award. This wasn't much of a surprise considering the image was selected to grace the posters for this year's show. But this honor doesn't mean downtime for this prolific artist-he still has several important shows, including the Santa Fe Indian Market and the Institute for American Indian Arts (IAIA) Museum Market.

"Morning Blessing Songs" was well received by show attendees. It clearly demonstrates the Beauty Way of life that Franklin celebrates, depicting a shoulder-to-shoulder wall of male and female spirits on the horizon.

Other symbolic figures are lavishly painted into the scene, including the clothing and jewelry adorning the spirits, a four-directional symbol, a hogan with a blanket hanging in the doorway, hummingbirds, clouds, animal spirits and more.

"It is [from] the intercourse between the sun and the earth that all life on our Mother Earth as we know it is sustained," Franklin explained.

But this was his prepared statement. In the comfort and beauty of his studio, Franklin drops any facade and lets his hair down, so to speak.

Franklin has been part of the Native American art scene for several decades, and has undergone a steady transformation. He originally worked as a silversmith until the price of silver skyrocketed. He has also worked with marble and alabaster. But his truest love is painting.

He first entered the Museum of Northern Arizona's Navajo Marketplace in 1980, and took first place in the Oil Painting division for a painting depicting the highly overrated appearance of the Comet Kohoutek (first discovered in 1973).

"Everyone got all riled up about seeing this comet, which was at first thought to be the most visible comet in our lifetimes," Franklin laughed. "It turned out that it wasn't all that spectacular, and in fact many people didn't even take notice of it at all."

This inspired his abstract painting, "Sleepers," showing Kohoutek passing over the heads of a group of sleeping people.

When asked what he saw as the most difficult part of being a full-time Native American artist, Franklin's answer was surprising.

"Invisibility," Franklin quipped. "We're still invisible. It is a matter of continually having to prove yourself. People don't want to recognize you as a "real" artist. The hardest part about being a Native American artist is that I am continually expected to prove myself.

Franklin spent eight years in the Bay area, and moved to Flagstaff in 1972. His eight years in California included a two-year residency on Alcatraz Island during the American Indian Movement (AIM) takeover.

"I was part of the support group, listening to and learning from spokespeople that came to Alcatraz, many of them AIM personalities. I became aware of our struggles, and who we are as Native Americans."

Franklin brought his knowledge of social issues to Flagstaff. He worked for Northern Arizona Council of Governments (NACOG) and Native Americans for Community Action (NACA), where he also served as a board member. He managed NACOG's weatherization program and FEMA funded programs. He also rented a small studio space from photographer John Running for about $35 dollars a month.

"Around that time Anita Parlow came to me and asked me to do paintings emphasizing the plight of Navajo people having to be removed from their ancestral land," Franklin said.

Despite his interest in Native American issues, Franklin guesses that only two percent of his work to date has been politically inspired.

"My emphasis is on the Beauty Way and the culture of the Navajo People," Franklin said. "One very political piece that I can think of can be viewed at the IAIA museum in Santa Fe. The title of the piece is "The Legacy and Revelations of the American Indian, Past, Present and Future: The End of the Trail."

When asked did he believe that we as global citizens are at the end of the proverbial trail, Franklin answered thoughtfully.

"We are ending one trail and beginning a new one," Franklin said. "Native people are entering a different kind of Indian war. As I see it, the Indian Wars are not over. As Indian people, we are going to have to come out of the closet. We read about issues in the paper, and feel that they don't affect us, but they do."

Franklin said that one of the biggest problems facing Native Americans today is the loss of language and identity.

"The larger society is now dictating to us what we should be rather than us dictating to the world who we are," Franklin explained.

"As artists-writers, painters, songwriters-we have a certain responsibility to be true to ourselves and to our own identity and put this down as honestly as we can. Right now, a third party is dictating to us of what they want to see. I recently overheard someone's comment on one of my pieces that it wasn't 'Navajo enough.' As a Diné artist, whatever I perceive, whatever comes from my soul is still Diné."

Franklin said that people-art collectors, gallery owners, etc.-want Native American artists to paint what sells. That is typically vignettes of the past, and what they see as Native American.

Franklin also believes that his work is so diverse that he confuses his audience.

"My art is not constant. During a recent show at the Pueblo Cultural Center, people commented that they had thought my pieces had been done by several different artists. I am not being identified by my work. Because it is diversified, many viewers are confused as to what I'm doing, but it just comes out that way."

When asked what influence his age has on his art, Franklin was completely candid.

"My age has brought about an understanding of the fact that I don't have the luxury of procrastination. I don't have the luxury to dwell on a piece, maybe let it sit for five years while I think about it," Franklin said. "When I was younger I looked at fame. I had a need to be recognized. Now I think more about posterity and my contribution to the body of Native American art."