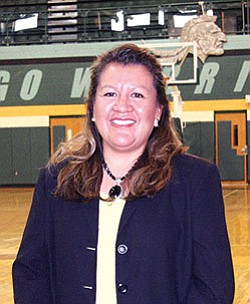 TUBA CITY-It's been about four years since she was last at TCUSD, but Jacquelyne Wauneka is back. This time she's the principal at the highly accomplished western Navajo agency high school.

Wauneka, who holds a master's degree in educational leadership from Western New Mexico University, a bachelor of arts degree in elementary education from Prescott College, as well as an associate of arts degree in liberal arts from Diné College, is looking to help the Tuba City Districts's governing board streamline Tuba City High School in both academics and sports programming.

Wauneka spent the 2002-2003 school year as assistant principal at Tuba City Junior High, so she is no stranger to parental familiarity, local cultural and community issues and excellence in academics.

Her most recent educational leadership work was at Window Rock Unified School District in Ft. Defiance where she was the assistant principal and dean of students.

It was at this last post that Wauneka had the opportunity to develop policy in areas of student handbooks, prepare school budgets, prepare formal written reports to Arizona Department of Education, the Navajo Nation and also to the Window Rock Unified School District administration as well as directing state testing and coordinating sports activities for an extremely large school district.

Wauneka has prior firsthand experience in monitoring and guiding federal projects, teaching in the areas of math and science as well as assessing English as a Second Language (ESL).

She brings this extensive educational knowledge to the Tuba City District which will only serve to give her a greater understanding of what teachers face each day in the classroom setting.