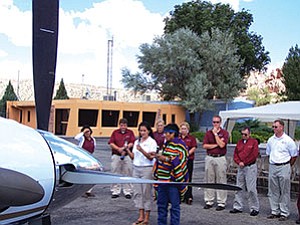 "The addition of this aircraft is just one of the many things Eagle Air Med is doing in their continued efforts to provide the very best in air ambulance care for the Navajo Nation," said Joseph L. Hunt, President of Eagle Air Med.

The C90b, manufactured by the Raytheon Aircraft Company, is a large aircraft powered by twin turbine engines allowing the aircraft to fly 1,800 miles with a cruising speed of over 300 mph, and reaching an altitude of 16,000 feet. With its superb safety record the C90b is considered by many to be the premier air ambulance aircraft throughout the United States.

"This new C90b is like the corporate jet used by the President of the Navajo Nation," said James L. Hunt, Vice President of Eagle Air Med. "Although it was originally manufactured as a luxury jet, once we refit it like our other C90b's, it makes an ideal mobile intensive care unit."

Each Eagle Air Med aircraft is manned by at least one pilot and two specially trained air medical personnel-either registered nurses or paramedics. This allows Eagle Air Med to offer Critical Care Life Support, ALS (Advanced Life Support) and BLS (Basic Life Support) services throughout the Four Corners area. In addition, because of its size the C90b allows for one "ride-along" as well as the patient.

"In addition to a new, safe airplane, Eagle Air Med has based experienced and extensively qualified medical crews and pilots at the Window Rock base," added James Hunt.

Eagle Air Med medical personnel must have ACLS , PALS, and Advance Trauma Certifications in addition to extensive critical care, emergency room and intensive care experience. Likewise, Eagle Air Med pilots must be experienced and well trained including a minimum of 2,000 hours of total flight time, Airline Transport Pilot rated, have a FAA Medical Certificate issued by the U.S. Department of Transportation and are trained specifically in the aircraft type and model flown. They must also have instrument, commercial and multi-engine ratings, are trained in all weather and night conditions, and on soft field and short field take-offs and landings.