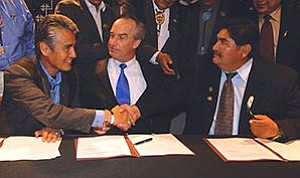 KYKOTSMOVI-Hopi Chairman Ben Nuvamsa and Hopi Vice Chairman Todd Honyaoma Sr. are battling about who should be in the chairman's post.

Honyaoma is one of several councilmen who feel Nuvamsa was wrongfully elected because he allegedly lacked proper residency and now he feels a lawsuit by the chairman would hurt the tribe's sovereignty.

Honyaoma recently gave a speech at the University of New Mexico Law School stating that a lawsuit filed by Nuvamsa threatens the sovereign immunity of the tribe and tribal council.

"If the Hopi trial court rules in our favor by determining that there is no authority to nullify the election, it will not threaten either the inherent immunity of the Hopi Tribal Council nor that of other tribes," he said.

Nuvamsa said such a ruling will have a positive impact in Indian country by establishing case law that will emphasize the dangers of tribal councils addicted to the powers that they believe they have, under the guise of sovereign immunity, to be without challenge.

"What it will do is send the clear message that when tribal councils act outside their lawful authority, tribal courts can reverse their actions, without threatening sovereignty," he said.

Both sides say the separation of the different government branches are important. Honyaoma contends that Nuvamsa's lawsuit, which would overturn a tribal council resolution, attacks the powers of the tribal council.

Nuvamsa counters that a court decision that sides with him would emphasize the importance of clearly established separations of power in tribal governments.

Nuvamsa's lawsuit challenges a resolution by the Hopi Tribal Council that briefly removed Nuvamsa from the chairman's seat. Nuvamsa has been reinstated since that time.

Honyaoma said only the Hopi Tribal Council could grant Nuvamsa the relief he is seeking from the court.

Honyaoma said any government that lacks immunity from lawsuit is hampered because its government officials will fear any action that they take because they and the government will be subject to lawsuit.

Nuvamsa said when tribal councils can circumvent the will of the people by defying established tribal laws, by reversing certified elections and by claiming that tribal courts have no jurisdiction over them that there is no rule of law in that community.

"There is only ruthlessness, arrogance, tyranny...ultimately breaking down to a form of dictatorship where a handful of leaders dictates without regard for the will or welfare of the people," he said.

Nuvamsa said while tribal councils can make laws that they also must abide by them. He said in this case the Hopi Tribal Council broke the tribe's laws by attempting to nullify the election. He added that this denies the Hopi and Tewa people's right to vote and made these council members answerable to nobody including the Hopi courts.

The case was initially heard by the Hopi Appellate Court, which issued a temporary restraining order saying the government officials had to recognize Nuvamsa as the chairman pending the decision in a trial court. The Appellate Court's order, issued on May 17, was in effect for 15 days and remains in effect.

Byrnes said when the court granted Nuvamsa injunctive relief that it denied the Hopi government officials the protection of sovereign immunity.

Byrnes noted that a second hearing was held to consider the defendants' motion to dismiss. The defendants argued that the court does not have the right to require the Hopi Tribal Council to rescind its action.

"The tribal council may not be sued absent an express waiver of the tribe's immunity by either the council itself or Congress," Byrnes said.

Nuvamsa said even if the tribal council is immune from lawsuits, as Byrnes claims, that the individual members are not when they act outside their authority.

He contends that the tribal council members acted outside their authority by attempting to nullify the election.

"If the Hopi Tribal Court rules in our favor, it will send the strong message that out-of-control tribal councils are answerable to the people and tribal courts," he said.

Nuvamsa said a favorable ruling would also highlight the need at Hopi and throughout Indian country for assessing the tribe's governing laws. He said in Hopi's case this would mean taking a look at the tribe's constitution and by-laws--and using a constitutional referendum to strengthen its weaknesses.

Honyaoma said the tribal council has not granted any waiver of its sovereign immunity.

"The court does not have the power to waive immunity on the tribe's behalf. Therefore the trial court may not exercise jurisdiction over the council. The court lacks the power to issue an order that would afford Mr. Nuvamsa the relief his lawsuit seeks," he said.

Honyaoma maintains that if the court issued an order giving Nuvamsa relief that it would set a dangerous precedent not only on the Hopi Reservation but throughout Indian country.

"Sovereign immunity has been recognized and applied consistently not only in federal courts, but in the courts of the Hopi Tribe," he said.

Honyaoma said the defendants are committed to protecting the tribe's sovereign immunity and will vigorously defend immunity in the Nuvamsa suit.

"Sovereign immunity is an inherent attribute of the Hopi Tribe and must be maintained at all costs. A waiver of sovereignty immunity will threaten the tribe's right to self-govern," he said.

Nuvamsa said the argument that his lawsuit would be an infringement on tribal sovereignty or sovereign immunity is shamefully inappropriate and crafted to protect the tribal council and its members from scrutiny.

Nuvamsa said this is about the right of the Hopi and Tewa people to elect officials without interference after-the-fact by disgruntled candidates who also serve on the council.

Nuvamsa noted that there is a legal process in Hopi law for challenging an election, but the process does not include any authority for the tribal council to nullify an election.

"The ultimate authority in Indian country should be and is the people, not the tribal council," he said. "At Hopi, the people have spoken in the election."

Nuvamsa said the arguments for tribal sovereignty or sovereign immunity are better reserved for cases where an outside sovereign tries to impose unlawful jurisdiction into Indian country, but not to defend illegal actions of a tribal council.