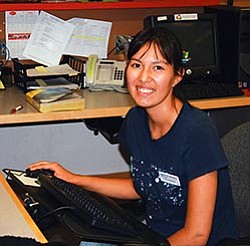 FLAGSTAFF-When her financial aid was running thin, Coconino Community College student Shantelle Harker saw a scholarship available on the Phi Theta Kappa honor society Web site and thought, "Why not apply? There is always the chance."

That chance proved to be the real thing worth $1,000 and Harker became CCC's 2007 Coca-Cola Scholars Foundation award winner.

Since 2000, the Coca-Cola Scholars Foundation has committed $400,000 in scholarships each year to students attending two-year degree institutions. Harker is among 400 recipients nationwide who have been recognized in this year's program.

One of the requirements for the scholarship is to have a strong background in community service. For the past two years, Harker and her family have participated in the Adopt a Highway program. She has also been volunteering as a nursery teacher at a church on the Navajo Reservation.

Harker has been the CCC faculty receptionist for three years while attending school. She is working toward a dual major in administration of justice and nursing. She plans to transfer to Northern Arizona Uinversity to complete her nursing degree in spring 2010.

"I would encourage every student to apply for scholarships and not to give up because the opportunities are out there," she said. "It seems that there is a lot of money, but nobody takes advantage of it."

Harker has also received the CCC Employees Scholarship, the CCC District Governing Board Scholarship and the Raymond Educational Foundation Scholarship.

"I was overwhelmed with joy when I found out I had won multiple scholarships. The worry I had of not being able to pay for college is now nonexistent and I can continue to study and complete my degrees," she said.