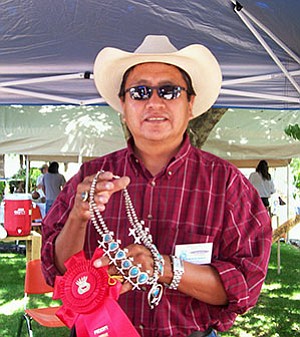 PRESCOTT-Allison Lee took second place in the jewelry division at the Prescott Indian Art Market, but his turquoise double strand squash blossom is second to none.

This unique squash blossom is selling for $25,000 and if it doesn't sell then Lee will just keep it in his collection.

Lee also creates earrings and bracelets-which are much less expensive.

In the early 1970s, there was a boom in Native American jewelry so at the age of 14 he started silversmithing. During the summer breaks, Lee worked at various silversmithing shops in the Gallup area.

He began competing in juried art shows in 1988 and continues that competitive artistic spirit today. In 1999, he was asked to join in making a piece of the Millennium Sampler Concho Belt along with 11 renowned Indian Market jewelers.

Lee, a full-blooded Navajo, is from Mexican Springs, N.M., but currently resides in Albuquerque with his wife Nadine and three sons.

In the amphitheater, E.J. Satala and Moontee Sinquah from Hopi served as the masters of ceremonies as there were performances by Polacca Dance Group, flutist Alex Maldonado with Melissa Maldonado on vocals and Nick Maldonado on percussion, flutist Adrian Wall and flutist Allenroy Paquin.

E.J. Satala, who is Hopi, Tewa and Yavapai, uses humor and guitar strumming to entertain as emcee.

Satala is known for his comedy as much as his music. He wears different hats for each of his Native American, Mexican, cowboy, hillbilly and blues skits.

He sings in the Navajo, Yavapai and Iroquois languages as well as English.

Satala said he picked up his humor from his father Ferris P. Satala who was the clown in Hopi ceremonies because of his humor.

Satala had a career in electronics and served as the director of Carson Indian Center in southern California before retiring. But Satala continues to work for Elderhostel.

Satala said he likes the Sharlot Hall show because there is a variety of tribes and artists.

Born in Keams Canyon, he was raised in Polacca and graduated from St. Michael's High School. He attended St. Joseph's College in Indiana and Western States College before going into the Marines.

Baje Whitethorne Sr. has won awards at many shows for many years so it was no surprise when he took third place in two dimensional art.

Whitethorne's art is mostly spontaneous and a reflection of his Navajo culture. He is self-taught and most of his art shows his life experiences. He also works in abstracts.

Whitethorne's paintings are usually acrylics or water colors, but occasionally he will work in oils.

Born and raised in Shonto, Whitethorne graduated from Tuba City High School. He majored in art at Grand Canyon College and Northern Arizona University. He continues to work with schools through residences and consulting jobs.

Whitethorne is also working on a new children's book, Black Stallion. This was written by Walter Farley and will be translated into Navajo.

Whitethorne, who works out of a studio in his home, has four brothers and four sisters. Each is an artist in some way as the family talents include pottery, weaving and jewelry. His mother, Alice, is a renowned weaver.

Jesse Hummingbird, who is Cherokee, didn't win any awards but he has won awards here previously and served as a judge last year.

Hummingbird has won many awards including recognition from the Fred Jones Museum of Art at the University of Oklahoma.

Hummingbird tantalizes art lovers with his colorful paintings that mix the modern and traditional. For example, his painting "Let the Night Begin" shows the stomp dance, which is used for prayers. The background has birds and stars. A lot of his art shows the night including the reoccurring moon.

Hummingbird mixes his traditional Cherokee art with many other art forms including the Jewish painter Chegal. He mainly paints acrylics and etches.

Hummingbird has won major awards every year since 1984. In 1992, he was the Gallup Intertribal poster winner.

Hummingbird, who has lived in Bisbee for about 20 years, was commissioned in 2000 to paint one of his characters on the new Indian motorcycle.

His paintings sell for as low as $550, which is inexpensive compared to a lot of Native art.

"I have to make a living, but art should be affordable," he said.

Hummingbird said he likes the Sharlot Hall art show because there is a good variety of art and something for everybody's price range.

"I also like this show because it has a lot of variety," he said.

Hummingbird started to attend college, but after nine weeks decided it was not for him. He worked construction and other jobs before deciding about 25 years ago to make art his career.

Hummingbird said his art is self-taught, but he continues to learn from friends.

Born in Oklahoma, he was raised in Tennessee and South Carolina. He and his wife Sandy have no children, but two dogs.

Smith is a Navajo painter who teaches beginning drawing at Diné College in Tuba City.

Smith paints acrylics, water colors and oils. He mixes bright colors with soft earthtones. His paintings can take about 10 days, but sell for a minimum of $900. He usually paints traditional Navajos.

Smith was awarded with a Southwest Indian Arts Fellowship about three years ago.

Born in Tuba City, he graduated from Tuba City High School before earning a BFA from Northern Arizona University.

Art runs in his family as his mother, Mary Ann Begay, is known for her weaving. He said his wife Kalen and family give him inspiration for his art work.