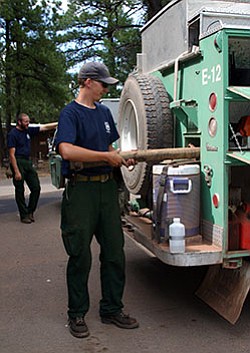 When firefighters are not on a wildland fire, they will work on preparing for prescribed fires, thinning the forest, physical training, and working on hose deployment and training with pumps to gain expedience on the job.

Even before reading the word "FIRE" on its metal frame, the pale green of the Forest Service engine is unmistakable to most members of the public.

As it disappears from the highway onto a remote road of the Kaibab National Forest, virtually everyone knows the green engine is likely headed into smoke and flames.

Jason Thivener, captain of Kaibab National Forest engine 13, said the immediate task of a Forest Service fire engine is to deliver firefighters to a wildland fire so they can knock down flames and create a buffer line around the fire.

Essentially, a Forest Service fire engine is equipment carrying equipment-water to cool a fire's heat; hoses to distribute water; shovels, Pulaskis, McLeods and other tools to dig fire line; and drip torches and fusees in case it becomes necessary to fight fire with fire.

And, of course, an engine's most important cargo is the fire crew.

On the Williams and Tusayan Ranger Districts of the Kaibab Forest, there are four Type 6 engines and two Type 3 engines.

"The difference between the engines is the number of people and the amount of water you can carry," Thivener said. "The Type 6 engine is smaller. It is very mobile and small enough to maneuver through the woods."

A Type 3 engine is larger, carries more firefighting personnel and has a larger water tank than the Type 6. Both engine types are critical, given the varying duties of Forest Service fire engine crews.

For the initial attack phase of a firefighting operation, getting to the site of a wildland fire quickly is crucial. That's why the fire engine is designed for the wildland environment, with four-wheel drive, rugged suspension and high clearance for mountainous, dirt roads.

Dave Pearce, captain of Kaibab National Forest engine 12, said if there is no access for an engine to get to a wildland fire, he will get the engine as close as possible to the site, leave it behind and have his crew hike into the area, carrying tools and water packs.

The key is getting to the fire quickly, with the goal of "catching it" before it gets big. An important tool in achieving that goal is the engine's load of water.

While water is a highly effective tool, Thivener said that using a combination of water and hand tools is key to containing a wildland fire.

Firefighters with hand tools can remove the fuels necessary to support a fire. Using water alone doesn't establish a control line around the fire.

While seeking to establish fire line, engine crews face a number of hazards. But, according to Thivener, the hazards truly begin when the key turns the lock of the ignition and the engine starts out to its destination.

"The biggest hazard we face is driving and dealing with other users on the roads," Thivener said.

But depending on the specific location of a fire, other hazards may exist including debris, boulders, narrow areas, steep terrain, and roadless locations. Even passing through traffic on the highway can be as dangerous as facing a fire.

Fires can start anywhere on the Kaibab National Forest. Some may be reachable by a forest road, while others may be located in an isolated, steep spot on a mountaintop. Regardless of the location, fire engine crews are often the first on-scene, facing the challenges of terrain and fire, to begin the suppression effort.