Havasupai to be featured at Kolb Studio 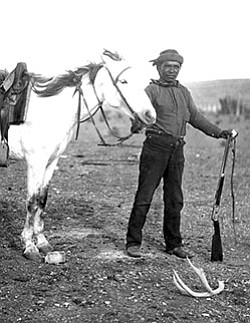 Jpbanga poses on the uplands in 1899. The Havasupai considered him a deer wizard for his hunting skills. (Photograph by George Wharton James, courtesy of the Grand Canyon National Park Museum Collection).

Although the Havasupai once called home the canyon regions as far south as [present day] Williams, west to Seligman, east to Cameron and to the northern reaches of the Canyon, they have been relocated, "banished" and squeezed in to many locations to accommodate the lifestyles and desires of the U.S. Now, they are being welcomed back to the studio that "clings to the edge of Grand Canyon" to reintroduce themselves to Grand Canyon visitors.

The dynamic exhibit will feature historic and contemporary photographs by Lois Hirst, Geo. Wharton James, Richard Barnes and many others. Signature objects of Havasupai culture and life such as basketry by Stella Manakaja, a buckskin dress by Albertra Manakaja, music by James Uqualla and Rex Tilousi will also be included as will Havasupai gourds, foods and corn.

"When you come in there is a tray of things from the land you can touch, you can smell.... It's just another way to connect people with the Canyon. The Havasupai feel that the exhibit itself is sacred space," Stephen Hirst explained. "The Havasupai are the people who lived here before the Grand Canyon Park displaced them and when you look down to Indian Garden, you're looking down at a Havasupai agricultural field. This, in essence, is still their land."

Several members of the Havasupai nation, the Havasupai Tribal Council, traditionalists, spiritualists and the Hirsts, who lived in Havasupai from 1967 to 1983, designed the exhibit. Stephen Hirst, however, is quick to clarify who is at the center of the exhibit.

"This is a celebration of the Havasupai. It's not really about me at all," he said.

"We the Havasupai people are inviting you into our world," they say of the exhibit. "Trace our journey; become one with us. Feel our presence."

Grand Canyon Association executive director Brad Wallis said "I am the Grand Canyon" has received substantial praise and sold very well not only in the Canyon and Arizona, but throughout the world. This success indicated the public interest in the Havasupai and contributed to the development of the exhibit.

"We hope that this will help to give the Havasupai people a voice and the opportunity to welcome people to their inner canyon home. They have a unique perspective and this will give visitors the chance to appreciate their perspective," Wallis said. "This is going to be one of our main exhibits of the year presenting really interesting insights into the Canyon."

He explained that he anticipates at least 25,000 visitors to experience the exhibit.

Wallis reiterated the Hirsts' focus upon the Havasupai and not themselves.

"Normally, we return royalties to the author, but Steven Hirst has decided to return all the proceeds from the book to the Havasupai people," Wallis said.

Entrance to the exhibit is free of charge. For more information visit www.grandcanyon.org.