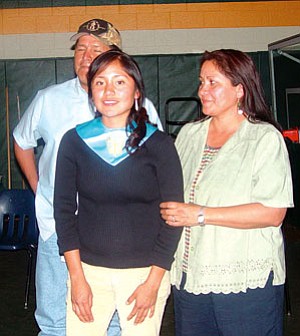 Established in 1921 by Dr. Edward Rynearson, a principal at a Pennsylvania school, the NHS declares the following as its mission statement:

"To create enthusiasm for scholarship, stimulate a desire to render service, to promote leadership and to develop character in the students of secondary schools."

Tuba City High School has held the Hopi and Navajo reservation school area record for the past 6 years with the highest number of NHS membership. Thirty one new members were recently inducted into the NHS, bringing the total for Tuba City High School to 64 current members.

Two senior NHS members not in this final list are OK Calsoyas and Sarah Tooke, who both graduated from TC High last winter. This brings the final total to 66 members.

Ira Mexicano, math teacher at TC High, was also a member of NHS when he was in high school. He serves as the current TC High NHS sponsor.

Mexicano and the TC High Counseling staff has honored these students each year with a special banquet and ceremony at the close of the school year.

Kieffer spoke highly of the students' outstanding accomplishments and acknowledged publicly the contribution that the parents of these students make daily to the success of their academic development.

Parents of NHS members also spoke during this special dinner. Patrick Scott, father of TCHS senior Lakota Scott stated, "I am very proud of my daughter...and all she has accomplished at Tuba City High School. I am grateful for all the support and guidance that TC High has provided and very proud of not just my own daughter, but each and every member and their parents for their joint accomplishments."

Dr. Diana Hu, mother to 2007 Arizona Cross Country State Champion senior Chris Holve said, "I want to acknowledge all the teachers and administrators for their support and guidance that are shown daily to our children as their students. I want to take this moment to recognize TCUSD for this academic involvement because each time a student does well individually, it automatically raises the academic bar for everyone else at this school district and with this high level of educational expectation, it provides more challenges for our children to reach for more diversified academic opportunities."

For more information about the NHS program at TC High, contact the TC District Office of Public Relations at 928-283-1185.