TCUSD's "Fastest Bus in the West" 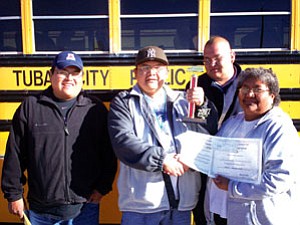 TUBA CITY-Tuba City Unified School District's (TCUSD) Transportation Department has an area-wide reputation for efficiency, driver safety and supportive weekday politeness to its student riders. But did you also know that out of 180 contestants at a recent Phoenix metro area "Bus Rodeo," the TCUSD now also has the reputation of having the "fastest bus drivers in the West?"

Francis Skacy, one of TCUSD's finest drivers, competed with three other TC District bus drivers in the recent 2007 Arizona Association's for Pupil Transportation's Bus Round Up, coming away with a second place win in the area of Rear Engine Transit. Skacy also won an award for accruing the most points for TCUSD in the area of Professional Driving.

The "bus rodeo" competition consisted of a pretest of 50 general knowledge questions about both bus driving and transportation safety as well as a ten course run.

Along with Robert Aguilar, Gloria Bizardie and Arnold Begay, Skacy represented TC District, bringing home a bus trophy and a check for $75 dollars.

Skacy, of the Tsi'nagjinii and Ashiihi clans, is a longtime resident of Tuba City and a five-year employee of the TCUSD Transportation Department.