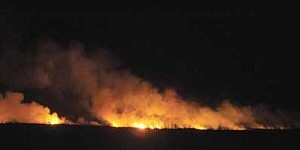 Freeway traffic slowed on Sunday evening once again. However it wasn't bridge construction that slowed drivers down as the weekend came to an end. Instead, a fire on the north side of I-40 between Transcon Lane and the Highway 87 exit was the cause of the disturbance. Drivers pulling off the freeway at the 87 turnoff to stare at the fire made it necessary for the Highway Patrol to close off the exit ramp, according to one DPS official.

Representatives from the Sheriff's department, Winslow Police, AZ Highway Patrol, and ADOT were all on hand to monitor the situation and ensure the safety of those looking on. The blaze had apparently begun sometime prior to 6:30 p.m., making it necessary for at least two of the officers to postpone their dinners. The fire spread to cover a large acreage in the Little Colorado River gorge. The tamarisk that has have taken over this area east of the Winslow Levee provided abundant fuel for the blaze, creating large columns of fire at times.

One of the officers on hand noted how fortunate it was that these flames and the large amount of smoke being created were being harmlessly pushed to the northeast, away from the freeway traffic.

Officer Chuck Hogdes, of the Winslow PD, stated that at that time they were unsure about the cause of the blaze. This represents the second major fire in recent Winslow history. The prior one being the railroad bridge that recently went up in flames creating a smoke screen for a number of town residents just a few weeks ago.