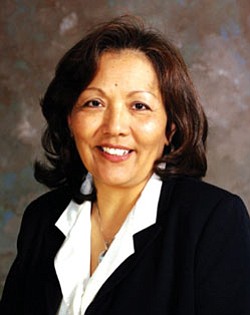 SEATTLE, Wash.-Dr. Cassandra Manuelito-Kerkvliet, newly chosen president of Antioch University Seattle, is believed to be the first Native American woman to ascend to the presidency of an accredited university outside the tribal college system.

Manuelito-Kerkvliet served as the first woman president of Diné College in Tsaile, the first tribally-controlled community college. While there, she successfully negotiated a 242 percent increase in tribal appropriations for the college with the Navajo Nation. She founded and directed the Indian Education Office at Oregon State University and has worked in various student service and counseling positions at Oregon State University, University of Oregon, University of New Mexico and University of Wyoming. Manuelito-Kerkvliet is the great, great granddaughter of Navajo Chief Manuelito and was appointed as president on April 17.

Most recently, she served on the Biological Sciences advisory board for the National Science Foundation and as a consultant for the American Indian Higher Education Consortium and Alliance for Equity in Higher Education's initiative to train future administrators in the Minority Serving Institution's Leadership Fellows Institute. She received her BA in social work and MS in counselor education from the University of Wyoming and her Ph.D. in educational policy and management with a specialization in higher education administration from the University of Oregon.

Manuelito-Kerkvliet was selected from a pool of more than 40 candidates for the top post at Antioch Seattle. She moves from Bozeman, Mont., to become Antioch president July 15. She replaces Interim President Mark Hower, who took over the position last year after Dr. Toni Murdock, former Seattle campus president, stepped into the role as Antioch University's chancellor. Murdock now oversees six Antioch campuses across the nation.

When Murdock announced that Manuelito-Kerkvliet had accepted the presidency, she noted, "She (Manuelito-Kerkvliet) will be a great asset to the Seattle campus and wonderful addition to the University Leadership Council. She brings with her presidential experience and a strong commitment to higher education."

At Antioch University Seattle, adult learners find innovative, individualized programs with a commitment not only to academic excellence, but also to community service and social justice. Antioch is an accredited university in downtown Seattle that offers numerous master's degrees, a B.A. completion program in liberal studies, a doctorate in clinical psychology plus teaching and other certificates.

Antioch Seattle is one of six campuses of Antioch University, founded in 1852 in Yellow Springs, Ohio. Horace Mann, noted abolitionist and first president of Antioch College, gave a charge to the class of 1859 that is repeated to each Antioch graduating class: "Be ashamed to die until you have won some victory for humanity."