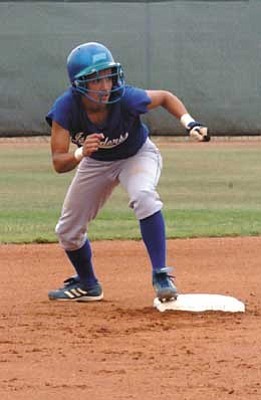 Winslow High School graduate Erica Armenta will be concluding four years of NCAA Division I softball when the Texas A&M Islanders end their season later this year. Armenta began her college career in an impressive fashion, but has been plagued with a series of ailments and mishaps for much of her time with the Islanders.

Father Ed Armenta and wife Monica plan to attend what could be Erica's final college game on May 5. The Islanders will celebrate Senior Day on that occasion as they host Texas State. Erica and other seniors on the squad will be honored at the game. There remains a possibility that the team can qualify for tournaments which would extend the season and her career.

Erica was the catalyst of the Winslow offense, batting lead-off and using her blazing speed to manufacture runs. This was especially valuable in tightly contested ball games. The Lady Bulldogs won 3A North Region Championships in each of Erica's four years at the school.

Winslow High School softball coach Becky Barris said of Erica Armenta, "Kids like Erica don't come through your program very often. Erica is a unique individual and a competitor in every sense of the word. This young lady knew exactly what it took to play at the college level and she never let anyone bring her down or get in her way. Whenever Erica would come home during Christmas break she would call me and ask to work out or got in the gym for conditioning, never allowing time for a break. Erica has had some health challenges during her college career, some coaching changes, as well as other types of adversity and throughout it all, she never lost sight of her goals and continued to work extremely hard in softball and academics. She had opportunities to change colleges during her four years, she was actually recruited by many, but she signed and committed to be an Islander and that is where she will finish her career. It was truly an honor to coach such a fine young lady. I hope she will continue with softball and someday become a coach; she is a true student of the game and would have so much to give back to a game she loves. We are all proud that Erica was a Bulldog and wish her the very best as she finishes college and moves on."

The first year at Corpus Christi proved to be Erica's best of her career. She moved to second base and led the Islanders in hitting with a .313 average. She set the school record for stolen bases with 22 successful attempts. She also was the first Islander ever to record four hits in a game. Erica was named the Big South Conference Freshman of the Year and helped her team win the conference championship. She had one of the team's three hits in its NCAA Tournament appearance against a highly regarded LSU team.

Illnesses and injuries took their toll in most of the remainder of Erica's career. She suffered wrist injuries in each of the following years, some of which kept her out of the line-up for extended periods of time. She had a real scare with cancer and heart problems and battled asthma throughout her career. She sustained an ankle injury that will likely require surgery at a future date.

As a sophomore, Erica appeared in 52 games and moved to center field. She finished the season with a .267 average, fourth on the team. She tied for the lead in stolen bases with 12.

After Erica's sophomore year, Coach Missy Phillips left the Islanders to take over the program at the University of Mississippi. She tried to convince Erica to transfer, but she chose to remain loyal to the school that had provided her scholarship.

Incoming coach Dawn Wuthrich was most appreciative of Erica's loyalty and of her contributions to the team. She commented that Erica has been a strong leader both on and off the field during her time at Corpus Christi. She described her as one of the top players in the conference and one who leads by example. She said that that Erica was a hard worker who constantly strove to improve her game. She cited her as a coach's dream, trustworthy and dedicated a real pleasure to coach.

As a junior; Erica led the team in hitting again with a .277 average. She saw time as both an outfielder and at catcher. She tied for the lead in stolen bases and led the team in being hit by the pitcher.

To date in her senior season, Erica is second on the Islanders in stolen bases and fourth in hitting. She is winding up an outstanding career that likely would have been much better had the injury bug not bitten.

During her time in high school, Erica and Ed Armenta could often be observed putting in extra time at practice. Ed is a very know legible coach and both are tireless workers. That time paid off in successful careers both in high school and college.

Erica has a brother, Lucas Armenta, playing baseball at Seminole University in Oklahoma. Lucas was also an outstanding three sport athlete at Winslow High School. She has another brother, Peter Armenta, who is a senior at Winslow High School and a member of the basketball and track teams. She has an older sister, Candice. Her mother Pamela Wade and her grandparents Frank and Elsie Duggins are also extremely proud of this fine young woman and her accomplishments.

Erica Armenta will graduate on May 12, 2007 with a Bachelor's Degree in business.