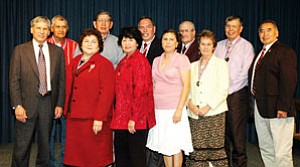 TAHLEQUAH, Okla. - Honoring nine Cherokee citizens for their dedication to Cherokee people and culture, the Cherokee Nation recently presented the Principal Chief's Leadership Award to several of the tribe's most giving citizens.

The leadership awards are given annually in recognition of Cherokee citizens who demonstrate leadership and a giving spirit within the Cherokee Nation and its communities.

"The Cherokee Nation believes that the strength of our future lies in our communities," said Chad Smith, Principal Chief of the Cherokee Nation. "These people were chosen to receive the leadership award for their guidance and dedication to Cherokee heritage and communities."

Jack D. Baker has dedicated his life to the study of Cherokee history and shares this knowledge with anyone who desires to learn. He has almost single-handedly spearheaded the growth of the National Trail of Tears Association. Baker currently serves as a Cherokee Nation Tribal Council Member, treasurer of the Cherokee National Historical Society and is the only Native American serving on the board of the Oklahoma Historical Society. Jack is a role model for all Cherokees in working to preserve the Cherokee heritage.

Lorraine Hummingbird Bates is a retired nurse with a heart for elders. Bates graduated in 1980 with a Bachelor of Science in Nursing. Continuing on with her educational goals, Lorraine completed graduate school in Cincinnati, Ohio. After returning to Oklahoma, Bates continued to work in the medical field as a director of Community Links, a home-health care and private duty nursing department for two area hospitals, Miami Baptist Regional and Grove General Hospital. The lack of available nursing service for elderly patients caught her attention and an in interest in geriatric nursing resulted. Though retired from nursing, Lorraine continues to work with the elderly through the Cherokee Elders Council, Inc. and as a Vista volunteer. In 2002 she was awarded the Joe Henton Memorial Award for Outstanding Advocate for the Elderly. Lorraine's compassionate nature has endeared her to many.

Jack Christie of Fairfield, Oklahoma is a descendant of Cherokee Trail of Tears survivors Watt Christie, a Senator in the Cherokee Nation, Lacy Christie, who established a Ceremonial Ground in the Wauhillau Community and Ned Christie. Upon graduating from Stilwell High School, Jack joined the U.S. Navy and attended school at Northrop Institute of Technology in Englewood, California. He worked 12 years as a construction foreman and is now with Baldor Electric in Westville, Oklahoma. Christie's commitment to family and community is evidenced by his leadership in the Fourkiller and Fairfield Cemeteries. A member of the Warpony Community Outreach Organization, Jack assists elderly and disabled individuals in need. He most recently helped to form the Fairfield Community Organization and plans to build a community building with a grant funded by the Cherokee Nation.

Karen Fourkiller is proud to be the great-great granddaughter of the revered Cherokee elder, Red Bird Smith. Fourkiller practices the ancient customs of close ties to the community with her attendance to the New Baptist Church and in continuous effort to help keep the community playground clean and safe for everyone to enjoy. In 2003, she volunteered to make glasses for athletes at the Special Olympics. Karen works regularly in the softball concessions stand during the Cherokee National Holiday and has coached girls little league softball and basketball. She received an Associates Degree from Bacone College and has worked at the Wilma P. Mankiller Health Center in the optometry department since 2001.

Ice Killer of Greasy has lived his entire life in the Greasy Community. As a young man, he loved to play baseball. When he was no longer able to play for his local team, he became the coach. Ice is an avid outdoorsman who loves to fish and hunt. Ice also loves to sing and attend gospel singings. Ice and his wife are dedicated to their children and grandchildren. He is a devoted community member who is always willing to lend a helping hand to a neighbor in need.

Harold "Jiggs" Phillips, awarded posthumously, was best known for his focus on improving the educational system for young Cherokees. He once said, "The basis of a strong Cherokee Nation depends on educated citizenry." Phillips lived an extraordinary life and served his family, his country and the Cherokee people. He impressed upon his family strong values of honesty and hard work. In his youth, Harold attended the University of Arkansas on a football scholarship and earned a Bachelor's Degree in Education. After serving in the U.S. Navy, he became a dedicated educator in the Westville School system as a coach, a teacher and mentor for 32 years. Desiring to contribute more to Cherokee communities and people, he was elected to fill John Ketcher's position as a Tribal Council Member after Ketcher was elected Deputy Chief. Phillips remained Cherokee Nation's Tribal Council for 17 years. As a result of his generosity and respect for others, a Harold "Jiggs" Phillips Memorial Scholarship is awarded annually to promising young Cherokees who are interested in pursuing a college degree. He left a legacy of commitment to education.

Curtis L. Rohr of Rogers County has been a Sunday school teacher for more than 52 years. To date, he has participated in 20 home mission trips for building projects on Indian reservations. Curtis has been active in several Rogers County community organizations, which includes serving on the Verdigris School Board, the District Five Rural Water Board and acting as team leader of Citizens to Incorporate Verdigris Township. Since his retirement, Rohr has been instrumental in helping others research their Cherokee genealogy and heritage through the Goingsnake Cherokee Heritage Association, Cooweescoowee Cherokee Heritage Association, the Rogers County Cherokee Association, the Cherokee National Historical Society and the Oklahoma Historical Society. Currently, he is a board member of the National Trail of Tears Association. Through his service to the Verdigris Assembly of God Church, to his family and to the Cherokee community, Rohr has touched many lives.

Smithy B. "Benny" Smith was raised in the traditions, practices, customs and values of Keetoowah life. With Cherokee as his first language, Benny has taught four college semesters of the Cherokee Language Courses I, II and III. The grandson of Red Bird and Lucy Fields Smith, he was educated by the Cherokee elders in the ancient Cherokee ceremonial and spiritual customs. He completed his teaching certification in 1962 and received his Master's Degree in 1966. During his educational career, he has taught at small schools in Alva, Keys and Waynoka and went on to coach at Haskell Indian Nations University from 1971-2002. Benny enjoys hunting, shoeing horses and translating Cherokee language documents. Smith lives a very spiritual life and is a revered Cherokee elder.

Laverne Carpenter Stone has helped many people and many groups throughout the course of her life. She helped to establish the Collinsville Cherokee Organization, assists with Tulsa Cherokee Community Work Project, helps rescue Tulsa area Indian cemeteries and sits with hospital patients and their families. Laverne is Shawnee, Cherokee and Delaware. She attended Seneca Indian School and graduated from Chilocco Indian School. Raised in a traditional Shawnee culture, Laverne is proud that she descends from Shawnee Chief Tecumseh, Cherokee Chief Richard Fields, Jr. and Cherokee Chief Corntassel. After retirement, she has continued to help others by studying and promoting the survival of the Loyal Shawnee language and has maintained activity in the Native American Church. Laverne continues to contribute to her Cherokee heritage by cooking for the Cherokee National Holiday and organizing floats for the holiday parade.

The Cherokee Nation is proud to honor each of these men and women for their contributions to the customs and traditions of the Cherokee way of life.

"These honorees would not go out and seek recognition for the good things they do," said Principal Chief Smith. "But they deserve to be acknowledged and honored for their commitment and hard work. I am humbled by their example of service, and am proud of the work that they do for the Cherokee people."