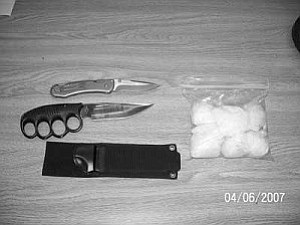 April 6 ­ Shane Nelson, 22, a Native American male, was arrested in Winslow when he was in a vehicle pulled over after driving away from the Wal-Mart Supercenter, where he purchased some plastic bags, typically used by many for packaging drugs to be sold.

The Major Crimes Apprehension Team with the assistance of the Winslow Police Department conducted a traffic stop on a vehicle driving down North Park Drive. The vehicle was stopped by police for failing to signal while switching lanes. Police discovered that the driver had a suspended driver's license and was taken into custody. The passenger, Nelson, was also detained at the time. Police then discovered that he had a knife concealed between his legs and another on his person.

Police said that Nelson was cooperative. When asked if there was anything else in the vehicle, police said Nelson admitted to having methamphetamine in the vehicle. He told police that he had placed it under the seat on the passenger side where he was sitting, according to police.

Police confiscated the meth, plastic bags and a personal amount of marijuana found on Nelson as well.

Nelson was living in California and said he was in Winslow to visit family. Police believe the meth was intended to be sold in and around Winslow and on the nearby Navajo Reservation.

Nelson said that he purchased the meth for about $12,000 from somebody on the street in California. Police valued the wholesale purchase amount of meth to be about $8,000 in the Arizona market. If separated and sold, the final street value of this meth would have been expected to bring in $24,000.

Jason Thermen, of the Winslow Police Department and MCAT, said finding knives on people is an example of how dangerous it can be when dealing with those involved in the drug world.

"We have had over 75 arrests in the Winslow, Holbrook and Joseph City area since the beginning of this year," Thermen said. "So far this is the largest quantity we have found this year."

Thermen said the meth problem is bad everywhere and is getting worse as it is the most popular drug out there these days.