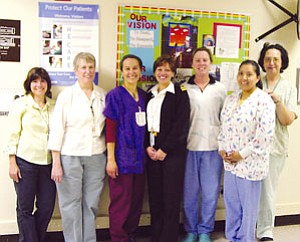 Nurse-midwives care for patients in the OCU 24 hours a day. Obstetricians are always available for high-risk pregnancies or when anything abnormal begins to occur during labor. The World Health Organization (WHO) recommends the certified nurse mid-wife/obstetrician model utilized at Tuba City hospital.

While sometimes necessary, a Cesarean section is major abdominal surgery, carrying with it a considerable list of risks, such as bleeding, infection, damage to nearby organs such as the bowel or the bladder, scar tissue formation, and a higher risk in future pregnancies. When a Cesarean section is necessary, it can be a life-saving procedure for both mother and infant.

"We are strong advocates for VBAC at this facility for appropriate candidates, and we have an excellent success rate with no known uterine ruptures over the last 10 years," said Dr. Amanda Leib, TCRHCC OB/GYN chief.

In 2006, among 28 mothers who chose to have a VBAC at Tuba City hospital, there was an 82 percent success rate. Twenty-four women had successful vaginal births, and four underwent Cesarean sections.

"The decision for Cesarean section is usually made between the doctor, certified nurse mid-wife and patient. There are many reasons why women have Cesarean sections, and the events leading to such a decision vary depending on the situation," said Dr. Leib.

"Some reasons the Cesarean section rate is low at Tuba City hospital are that we offer VBACs, we have a certified nurse mid-wife/obstetrician model which allows more one-on-one attention during labor and delivery than at other facilities, and that we are very involved with our high risk patients. We believe in active management before fetal problems occur."

Barbara Orcutt, director of nurse midwives at Tuba City Hospital has been a certified nurse mid-wife for 29 years. She remarked, "I've been associated with numerous practices and hospitals in various parts of the country, and the acceptance of certified nurse mid-wifery here is wonderful. We have a close working relationship with our obstetricians and we are valued."

In addition to following traditional ways, the OB/GYN Department is scheduled and run in such a manner that both patient and provider will very often see a familiar face when a woman is in labor. Certified nurse midwives staff the OCU 24 hours a day, and they work 12-hour shifts so there is continuity with any one patient with a large block of time.

"Our schedules are structured as such that we don't think in terms of 'It's Friday afternoon and I'd better get her delivered before the weekend,'" said Orcutt.

Dr. Leib continued, "We regularly review our Cesarean section rate and individual Cesarean sections as a department, looking for ways we can improve and offer even better patient care."

Pregnant women considering a Cesarean section with no clear medical reason for it should know that the procedure is not without risk, Canadian doctors caution in a report in February 2007. Dr. Shiliang Liu with the Public Health Agency in Ottawa, Canada, and colleagues, report that the rate of severe complications, such as major bleeding, infection and blood clots, is three times higher overall in women having a planned Cesarean section compared with women who have a natural birth.

This data adds to a growing body of evidence suggesting that primary elective Cesarean section birth may place both the mother and newborn at greater risk for complications.

"We have some really fine doctors and providers at Tuba City hospital and in the Indian Health Service," remarked Orcutt. "We provide excellent maternity care that is based on sound medical evidence and do not engage in the legal protective thinking that pervades obstetrics elsewhere."

"It's a wonderful way to practice," Orcutt continued, "just doing the natural thing, the right thing."

"Here on the Navajo Reservation, there is still a cultural acceptance of labor and birth as a natural function of the body, and great stoicism in labor. All of this decreases interventions. All of these things factor into our low Cesarean section rate at TCRHCC."

The Arizona Perinatal Trust is created to be an independent source of energy and resources to focus efforts on the continuing improvement of the health of Arizona's mothers and babies.

Based in Casa Grande, the Arizona Perinatal Trust (Trust) is a non-profit organization, working to continually improve the quality of care for Arizona's mothers and babies.