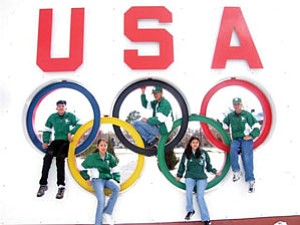 The mission of the Tuba City High School MJROTC program is to "strengthen the character of young men and women by teaching self-discipline, self confidence and leadership skills in the development and disciplines of understanding the responsibilities of citizenship."

Gunnery Sergeant Tim Shaner and First Sergeant Ken Bustamante make no bones about who's running the shop when it come to discipline, honor and team concepts at TC High's award winning program. Their hard line personal examples of supervision and guidance have paid off in a big way.

The TC High MJROTC program has not only achieved Arizona State recognition for its sharp shooting and drill team efforts, but since the last marksmanship competition held in Colorado Springs at the Western Region Championship last month, they have "aced" the top spot for being ranked number one in the nation at the high school level going into national competition next month in Georgia.

In the past three years, TCHS has taken over the top state spot and has been relentless in maintaining its state and national status.

TCHS is the only reservation area school to achieve such status and a large part of that success formula is due to both Shaner and Bustamante's firm and constant guidance in requiring their students to be excellent in academics, discipline, healthy diet as well as participating in community service throughout the year along with their own daily practice of shooting and drill practice.

Both the Navajo Nation and the Hopi tribes made the time and special trip in fall 2006 to congratulate the TC High MJROTC Program for their state and national wins, since the winning teams are comprised of both Hopi and Navajo student members.

Gunny Shaner said, "I am extremely proud of our 2007 team. They did an outstanding job of representing Tuba City High School, this district and their home communities. They practice from 10-11 months a year non-stop, and its their own individual hard work, dedication, sheer commitment and competitive spirit that have put them at the top of this game. These special TC High Warrior Teams have shown their sincere desire to win and even more astonishing, to vow to be even better, next year."

For more information about the TC High MJROTC program, call the Tuba City District Office of Public Relations at 928-283-1185.