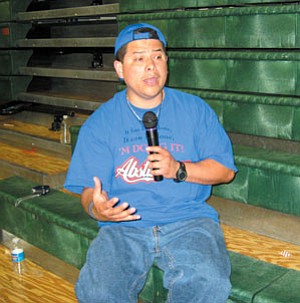 Galdamez is a dynamic motivational speaker, community educator, and trainer.

During his presentation, Galdamez stressed that abstinence is not just about waiting until marriage to have sex.

"It's drugs, it's alcohol, it's violence, it's about your culture and identity," he said during his presentation titled Boom! How We Doin'?

"We're here to talk about two things," Galdamez said. "One is abstinence, the other is called communication."

During his two-hour presentation, Galdamez volunteered parents and teens from the audience to help one another learn effective communication.

Teens in the audience admitted that they are mostly influenced by their friends and the media.

Galdamez said the media, such as television, magazines and music, give people the impression it is "cool to have sex, drink, smoke, do drugs, and party. Further, that the media shows there are no consequences, when in reality there are many, pregnancy and STDs to name a few."

Galdamez told parents and teens of the importance of kids being shown reality, not what the media portrays.

The main topic of the evening centered on sexual abstinence until marriage. Luis indicated that he does not accept that abstinence does not work. In fact, on his tee shirt was the phrase, "It can be done. It has been done. I'm doing it.-Abstinence." As an unmarried father of three, Galdamez practices what he preaches.

Throughout the lecture, parents and their children were asked to stand together and express to each other of their love for one another. Galdamez asked the parents to support their children and to believe in themselves. He asked children to talk often with their parents and not just to ask for things. He reminded the students to tell their parents that they loved them. There was a lot of emotion as parents and teens embraced one another and publicly shared their love and appreciation for each other.

As a metaphor for having sex with multiple partners and the risk of contracting sexually transmitted diseases (STDs), Galdamez showed a video of several individuals passing around a bottle of water, taking turns drinking it and then attempting to give it to another individual to drink from.

He also demonstrated a similar point by holding up two bottles of water and asking parents and teens, "which would you rather have, the half empty bottle, which I drank from and backwashed in, or the full bottle no one drank from?"

All agreed they wanted the untouched one. The demonstration showed how quickly STDs are contracted from one partner to another. "If you have sex with someone, you are having sex with every person your partner had sex with, making you more vulnerable to contracting an STD."

STDs in Indian Country are no different than the rest of mainstream America. According to a recent study by the Navajo Division of Health-CDC-Navajo STD Project Area, shows that syphilis made a significant increase from January to March 2007. This report also states that the rate of HIV/AIDs among Native Americans as well as other types of STDs remains at an all time high.

He explained that more than ever, parents, grandparents and teachers need to "step up to the plate" and take a more active role in the lives of their children.

With the busy lives most people lead now, many parents don't pay attention to their children, or they pass them off to the other parent, he said. Parents need to know when they need to be a parent to their kids, and when they need to be a friend. Parents need to help their kids realize their dreams and their goals, and help them prepare for their future.

Galdamez also talked about importance of college. Scholarships were discussed as well as the fact that it is never too early to explore scholarships for college.

He asked every student what they wanted to be, where they planned to go to college and what they planned to study. He also emphasized that by going to college, the students were, in fact, the future of Tuba City. Galdamez stressed the lack of shopping centers, public transportation, movie theaters, and most of all, a facility where teens can go to socialize and just have fun in the Tuba City area.

Galdamez also shared his own adventure of getting to Tuba City from California. His flight was cancelled at Sky Harbor late Monday night, so the airline decided to bus him up to Flagstaff where he was to rent a car. However, the car rental at Pulliam was closed. "At least the airline was willing to go the extra mile," Galdamez laughed, as he arrived four hours later than expected. What happened next according to Galdmez was an enlightening experience and made the entire trip worthwhile.

According to Galdamez, the airline arranged for a taxi to take him to Tuba City. As they headed north on Highway 89 the taxi driver got a call from Flagstaff Medical Center to pick up two patients who needed a ride back to Tuba City. Despite opposition from the driver, Galdamez insisted they turn around saying, "we're going to Tuba, maybe we can learn something from them."

The conversation that he later had with these two gentlemen emphasized further the need for treatment centers for substance abuse and role models and father figures for teens.

Galdamez and the two occupants arrived in Tuba City sometime after 3 a.m., Tuesday morning. Due to the weather, he was advised to stay the night in Flagstaff but declined. Later, Galdamez stated, "It was for the kids, I couldn't let them down."

Roger Trujillo, of Greyhills Academy High School dorm expressed, "The impact Luis made on the kids was incredible. I don't know what happened last night but this morning there was such a difference so profound I can't express in words. I'm a parent and school staff member, and I know any time you have an impact of this magnitude you have to follow up."

Finally, after pizza and cake was enjoyed, videos on abstinence were viewed by the audience. The evening proved to be very successful as feedback from parents and educators poured in.

Comments from students included, "Outstanding information for teens, thanks a million!!" and, "I liked the honesty, and the way the message was delivered using lots of humor." It was a moving and successful evening that was enjoyed by all.