H2OPI runners to arrive in Sedona for Earth Day 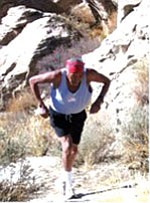 After running 130 miles from the Hopi mesas, the H2OPI Messengers including Hopi runner Bob Harris (above) will arrive in Sedona on April 22 carrying the gift of water (Photo by Joan Price).

SEDONA-Crossing the high desert is hard and painful, but runners don't feel the pain. They do not run for glory or to win. They do not expect rewards or recognition at the end of their journey. These are Hopi Messengers, and they will run for the run and carry the gift of water from Hopi to Sedona. After 130 miles of excruciating effort, the runners will arrive on the afternoon of Earth Day, April 22, to begin a very special week in Sedona. Crowds of friends and supporters will be at First Piggy Park, creekside at Los Abrigados Resort to welcome them.

The Institute of EcoTourism has partnered with the grassroots organization Black Mesa Trust to sponsor the run and the week of cultural and artistic exchanges. It will be the highlight of "April is Water Awareness Month" in Sedona. The run, activities and celebrations will serve to unite the Hopi and Sedona communities. Other tribes from the region will also join in as they honor the gift of water to this desert area.

The Run to Mexico City

The idea for this run was inspired by the 1500-mile Hopi to Mexico Run in 2006 when runners took messages about water from the Hopi mesas in northern Arizona to the World Water Forum in Mexico City. This run from the Hopi mesas to the banks of Oak Creek was organized to raise awareness of the value of water conservation in the desert. The runners will carry water and heritage seeds in traditional Hopi gourds from the mesas to share with the people of Sedona.

"Water goes beyond all cultures, all perceived boundaries, all languages, all living beings," said Diane Dearmore, executive director of the Institute of EcoTourism. "Let's celebrate and honor water because each of us carries the gift of water. The Hopis are coming here to help us remember that."

After three days of running across the desert and down through the canyons, the runners will arrive in Sedona where they will be greeted with a multicultural celebration hosted by members of the Hopi, Apache, Yavapai-Apache, Havasupai, Hualapai and Navajo Tribes as well as Sedona citizens, city officials and religious leaders.

The runners range in age from 12 to 75 years old. Long-distance running is a proud Hopi tradition that is still widely practiced on the mesas today.

"Our traditions, our beliefs, aren't dead," said Vernon Masayesva, past chairman of the Hopi Tribal Council and executive director of Black Mesa Trust. "We are the rain people trying to convey water's message of peace."

In addition to the run, Hopis and Sedonans will engage in a range of cross-cultural events and activities. At 6 p.m. on April 22, Harkins Theater in Sedona will show a screening of the film chronicle of the Hopi Run to Mexico City. The event will be hosted by Lindsay Wagner, television celebrity and longtime champion of American Indian issues.

During the rest of the week, there will be a heritage seed planting, concerts, Indigenous and local art exhibitions, a wonderful potluck picnic, a dance featuring traditional foods from many cultures and more water events and celebrations.

For more information about the events or to volunteer, call the Institute of EcoTourism at 928-282-2720.