Tuba City Community Park construction set to begin in May 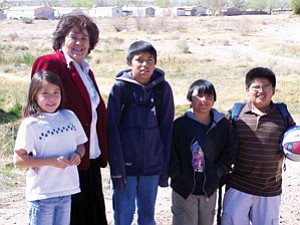 TUBA CITY-The Coconino County Parks and Recreation (CCPR) announces that the construction of the first community park in Tuba City will begin this summer. The park will provide the community with a beautiful setting for family gathering, education, exercise and recreation.

"I know the people of Tuba City have been waiting anxiously, especially the youth who want to see the park and be there everyday. The good news is it is going to be built soon. This community park is probably the best thing that will ever happen to Tuba City," District Five Supervisor Louise Yellowman remarked.

A portion of the funding to build this park is revenue from the Coconino County Parks and Open Space Program, a sales tax initiative approved by voters in 2002.

A fundraising campaign has also been going on since 2005. CCPR applied for and received a $780,000 Heritage Fund grant. Additional funding is being sought to provide amenities such as basketball court, more playground structure and shade ramadas.

The Tuba City community park is a result of two years of planning, involving local residents, especially children in the community, the Board of Supervisors, CCPR and the Coconino County Parks and Recreation Commission, as well as two years of design development.