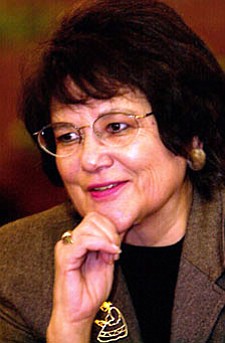 WASHINGTON, D.C.-Elouise Cobell and two other Native American leaders recently urged the Senate Indian Affairs Committee to reject a Bush administration proposal to resolve a number of Indian disputes, some of which have little to do with the long-running lawsuit over the government's admitted mismanagement of the Individual Indian Trust.

Calling the proposal "a slap in the face of every Indian Trust beneficiary," Cobell outlined an alternative course that she said could lead to settlement of the class-action lawsuit she and other Native Americans filed 11 years ago. She produced a real-life example of the harm the trust problems continue to create for Native Americans.

Cobell, a member of the Blackfeet Nation in Montana, brought forth James Kennerly Jr., another member of the tribe, who she said should be a millionaire, but because the government lost records of the oil leases that were on his father's lands, she said Kennerly has been forced into a life of poverty.

Kennerly told the committee he gets only $70 a month from lands that continue to pump oil. Those same lands once paid more than $1,000 a month to his father, according to an Interior report.

What happened? Interior officials say they do not know. Lease records for the lands have disappeared, Cobell told the committee.

That's typical of what has happened to many Indian lands in the West, she said. Records have disappeared and with that have gone the payments for leases on the family lands, the only source of income for many families, she said.

For Kennerly and others it is a matter of time and death, Cobell said.

"It robbed him of his health, an education and opportunity and the abuse continues today," she said. "He should be a millionaire, but, like his father, he lives in great poverty."

Cobell was joined in her testimony by John Echohawk, Executive Director of the Native American Rights Fund (NARF) of Boulder, Colo., and William Martin, vice chairman of the InterTribal Monitoring Association of Albuquerque, N.M.

Committee chairman Bryon Dorgan (D-N.D.) agreed that the government was reaching too far with that proposal. But he promised to continue to press efforts for a resolution to the Cobell lawsuit, which affects about 500,000 Indian Trust beneficiaries.

That was the course Cobell recommended. She called the $7 billion that the Bush administration proposed to settle her lawsuit along with those of the tribes and other issues "an insult, plain and simple."

Just last year the Indian Affairs Committee released a proposal that would have called for an $8 billion settlement of the Cobell case alone, she noted.

Although government witnesses continue to claim that their studies show very few losses to trust beneficiaries, Sen. Dorgan said those estimates are misleading. That's because most of the records that the government has examined are from 1985 forward and do not include most of the land-based accounts where many of the errors were made, the lawmaker said.