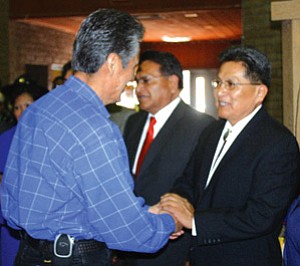 Editor's note: As of press time, no details regarding the Hopi Tribal Council's special session were available for publication.

KYKOTSMOVI-Ben Nuvamsa could soon regain his chairman's post with the Hopi Tribe.

The Hopi Tribal Council met on Monday, April 9 to consider rescinding its March 28 motion to nullify the primary and general election. The nullifying of those elections unseated Nuvamsa as chairman.

On March 28, the council voted to nullify the primary and general election after debating whether Nuvamsa had met the two-year residency requirement.

Nuvamsa called the Hopi Tribal Council's action "illegal" and said the council did not have the authority to nullify the election results.

The Hopi Tribal Council initially voted 10-8 to nullify the primary and general election, but since that time, Jerry Sekayumptewa Sr. was removed as council representative for Mishongnovi and Councilwoman Anna Mae Silas said she would change her vote.

More than 100 letters have been sent to the Hopi Tribal Council protesting their nullification of the special primary and general elections.

The session on Monday was scheduled to decide whether the tribe should hold another special election or whether they should wait until the next election. But since the nullification of the special elections essentially unseated Nuvamsa, there has been a movement calling for the Hopi Tribal Council to rescind their action.

Nuvamsa's attorney filed an injunction in Hopi Tribal Court calling for the council to rescind their decision.

Secakuku, who voted against the nullification of the special elections, said the Council overstepped its authority because it was in violation of Ordinance 34. He said this ordinance calls for any challenges to go to the Hopi Election Board and the Hopi Court.

Secakuku said if the Council wanted to have the authority to overturn the elections that they should have put it in Ordinance 34 when it was amended in 1996.

"The Council [instead] nullified the right of the people to vote," Nuvamsa said.

Secakuku said the Tribal Council has received more than 100 letters stating that they "goofed" by nullifying the elections. He added the Hopi Election Board followed the law and did their best under the circumstances.

"They reviewed the material and Ben produced the required documents," he said.

Secakuku said he believes Nuvamsa will make a good chairman. "He's knowledgeable, he's experienced in administration and he's been around the block."

Councilwoman Silas said she wants to rescind her vote in order to stand by her people. She added that she wanted to vote on the residency issue and not nullify the election.

But Silas said the residency issue was being blown out of proportion.

"He (Nuvamsa) has rights. He was born in Shungopavi and he has family here. They're making a big issue of [his residency] and they're making too big of an issue of that," she said.

Silas noted that there are only about 18 months until the next election. "So hopefully this will come out in Ben's favor," she said.

Silas said a lot of the council members did not understand that their vote was about nullifying the election.

Hopi Tribal Councilman Cliff Qotsaquahu did not agree, as he believes the Council acted properly and continued to produce documentation that Nuvamsa did not meet the two-year residency requirement.

In the letter, Sieweyumptewa stated that there were complaints from Hopi and Tewa people regarding Sekayumptewa's conduct with the general public. The letter said that Sekayumptewa voted only for his own personal benefit and not for the people he is supposed to represent.

The letter criticized Sekayumptewa for not attending Mishongnovi Village meetings, for voting against a Lower Moenkopi budget item and for his vote on the nullification of the primary and general special elections.

The letter states that his vote for the nullification of the elections robbed the voters of their right to vote as protected by the Indian Civil Rights Act.

Sekayumptewa has not yet been replaced on Council and had not returned any phone calls.