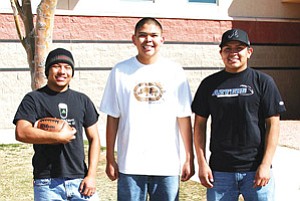 Pictured from left to right are Matt Shirley, running back, age 18; Buck Navaho, quarterback; age 18, and Sport Teller, linebacker, age 18. All will play as freshman for the Tucson based community college this coming fall. Not pictured but also given full ride scholarships to Pima College are Michel Mathias-Wide, reciever, age 18, and Jerrick Clinton, center, age 17. All players are from the Navajo Nation (Photo by Byron Poocha).

At Tuba City High School, the opportunity to have both is encouraged, nurtured and can get you a nice college offer if you excel at both.

TC High Head Football Coach, Bryan Tate is happy to announce that five of his Warrior football players recently signed letters of intent to play for Pima College in exchange for scholarships.

Despite the fact that each of these players were also offered other academic career choices, each decided that it would be fun to all play together this next year at the same college.

Two of these five players, have full ride scholarships, Buck Navajo and Michel Mathias both seniors will receive maximum benefit of their high school football prowess.

Matt Shirley, Sport Teller and Jerrick Clinton round out the 5 TC High Warriors that will head to Pima as freshman.

There is currently an enrollment of 75,039 at this institution with a four year program resulting in associate's degrees that are completely transferable to larger institutions.

This will allow the newest group of football recruits from TC High to choose a program individually suited to their tastes and skills while allowing them to further exercise their football prowess developed under the direction of TC Head Football Coach Bryan Tate.

Coach Tate stated, "Great players want to be pushed and challenged, ordinary players want the easiest way, so I have no doubt that these 5 outstanding TC High athletes will be successful at Pima."