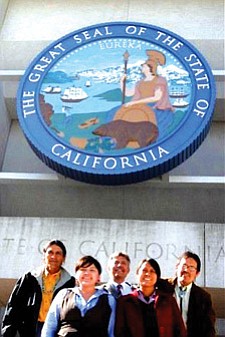 FLAGSTAFF-Members of the Just Transition Coalition were in San Francisco recently to participate in a public workshop held by the California Public Utility Commission (CPUC) to address proposals for the distribution of revenues from the sale of sulfur dioxide (SO2) allowances arising from the suspension of operation of the Mohave Generating Station. At the request of the Just Transition Coalition, the CPUC initiated a formal mediation process to take place during the next few months to facilitate an agreement between the tribes and the Coalition about how to disperse the funds from Mohave's closure.

"This workshop is another step closer to bringing sustainable economic development to Navajo and Hopi communities," said Coalition member Wahleah Johns of the Black Mesa Water Coalition. "I am also confident that this plan will benefit California ratepayers at the same time."

The Just Transition Coalition's proposal calls for those funds to be invested in renewable energy projects for the mutual benefit of California Ratepayers and the tribal communities long impacted by Mohave's closure. While SO2 allowance prices fluctuate on the pollution trading market, SCE's share of the SO2 allowances from Mohave's closure could range from $15-30 million annually. Southern California Edison Company (SCE), the primary owner of Mohave, offered plans to credit all of the SO2 allowances directly to SCE's ratepayers.

In addition to the Just Transition Coalition, representatives from the Navajo Nation, Hopi Tribe and Californians for Renewable Energy, Inc. (CARE) also put forward plans aimed at using the SO2 allowance revenues to benefit and restore the local communities impacted by Mohave's operation and closure.

"Tribes do have the capacity and offer some great opportunities from the Chapter and Village level to the Tribal Enterprise level, coupled with various tax incentives available to tribally owned companies. Well [planned] Hopi and Navajo renewable energy projects could become very good investments and can be very beneficial to California ratepayers," said Coalition member Tony Skrelunas of the Grand Canyon Trust.

Skrelunas added, "At the same time, tribal ownership in renewable energy development will benefit tribal economies and create significant return on investment if the proper incentives are put in place."

When the Mohave Generating Station in Laughlin, Nev. shut down at the end of 2005, it resulted in the shutdown of the Black Mesa coal slurry line and coal mine on Navajo and Hopi land. While this resulted in cleaner air over the Grand Canyon and less groundwater withdrawals from the delicate Navajo, the Navajo and Hopi tribal economies were negatively impacted by a loss in jobs and royalty payments.

The Just Transition Coalition formed in 2005 in order to bring justice to Navajo and Hopi communities impacted by the closure of the Mohave Generating Station and associated Black Mesa Coal Slurry Line and the Black Mesa Mine. In early 2006, the Coalition presented the first of its kind plan to the CPUC to use funds raised from the sale of SO2 allowances to fund renewable energy projects undertaken by Navajo and Hopi communities. In May 2006, the CPUC granted the Coalition's motion for these sales to be separately tracked by SCE and further directed SCE to retain revenue from those sales pending consideration of plans for their disbursement.

The Just Transition plan seeks to mitigate Mohave's impacts by transitioning away from a non-renewable energy source like coal to renewable energy sources like wind and solar, which will provide sustainable and long-term benefits to the tribal economies while also providing safer jobs to tribal members.

Coalition members, which include the Black Mesa Water Coalition, Honor the Earth, Indigenous Environmental Network, Grand Canyon Trust, Native Movement, Sierra Club, To' Nizhoni Ani, and the Apollo Alliance believe that such a plan will incorporate tribal spiritual and community values, including honesty and sustained efforts to support and empower people at the levels of families and villages, and tribes. The Just Transition Coalition retains legal counsel from Alan Ramo of the Golden Gate University Environmental Law and Justice Clinic, Kristin Carden of the Grand Canyon Trust, and Sara Steck Myers.

For more information on the Just Transition Plan, visit their Web site at www.blackmesawatercoalition.org.