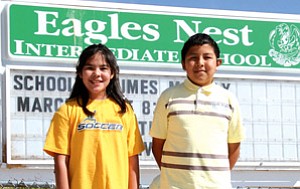 How many adults can spell words with origins from Latin, Arabic, Slavic or Japanese?

Two of TCUSD's "whiz kids" can, and they have proven their spelling prowess well enough to get them to the state contest.

Kenard Dillon, a sixth grader at Eagle's Nest Intermediate School and Kyra Kaya, a fourth grader, have both placed in the finals at the Navajo Nation spelling bee in Window Rock. This qualifies them to compete at the state and national levels.

Kaya placed first at the fourth grade level as well as becoming the overall alternate speller to go to Washington, D.C. in May. The first place winner was an eighth grader from Chinle. In the event this student cannot make it, Kaya will replace him.

Tuba City District held its own spelling contest on January 24 to select winners for regional competition at the fourth, fifth and sixth grade levels.

Winners then progressed into the Western Regional Spelling Bee held in Tuba City at Greyhills Academy High School on Feb. 15 where they competed against 13 other schools from the Western Navajo Agency.

Kaya, Dillon, and a third student, Mariah Provencial (a fifth grader at ENIS) successfully advanced to the Window Rock competition.

A total of 31 reservation area schools were represented at the Navajo Nation capitol competition.

Kaya is the daughter of Lynn and Spencer Kaya. Dillon is the son of Kenard and Maxine Dillon. Both families are from Tuba City.