Leupp Chapter welcomes one of its own as Dine VP candidate 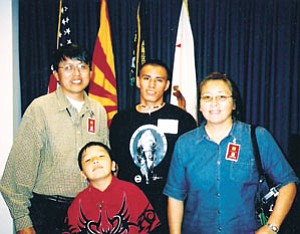 Lovejoy explained to the chapter that she had a list of men and women in mind when she accepted Phelps' invitation to attend his family's appreciation dinner for the Leupp Chapter and the Navajo Nation Department of Water Resources held at his father's home on Aug. 5.

"I did not know him," she admitted. "I went out with my husband. When I went to meetings, I was frequently asked, 'Who are you going to pick as a running mate?' When I am at these meetings, I met people who could speak well, and when they would ask me that, I would say, 'Maybe you can do it.'"

Lovejoy described herself as a very good observer of people.

"You may not think I'm paying attention [in meetings], but I am observing."

During her visit to the Phelps' home, she had the occasion to see Walter Phelps speak for the first time. Listening to him, Lovejoy thought to herself, "He's a nice young man. There he is, I'll add him to the list."

Lovejoy said that she had to pray about her choice for a running mate. She had grown up seeing her paternal grandmother, Jean Murphy, and her own father helping people in the community in a traditional way.

"With those two people in mind, and having seen what they've done to help others, I know that it [prayer] works."

Water was the big issue when Lovejoy began her campaign, and she was pleased to learn that Phelps shared many of her ideas and opinions.

Another big concern shared by Lovejoy and Phelps is that of the welfare of Navajo Nation veterans.

"Veterans are not getting enough help. Most don't have their own home or running water," Lovejoy said, adding that her administration would seek to set up a separate budget to benefit the veterans. She would also seek funding to build veterans clinics on the Navajo Nation. I want to put someone in who knows how to work for the veterans, who can look for and manage funding for Navajo veterans.

"We agree on the same issues," Lovejoy said of herself and Phelps. "We share the same ideas. As for council delegates, we will keep them at home so they don't have time to travel around. They have work to do at home."

Of Phelps, Lovejoy said that he had the necessary skills that would enable him to write legislation himself.

She told the crowd that she was thankful and fortunate to have found Phelps.

Referring to the words of an earlier speaker, Lucy David-indicating that with the new well in place she would like to see people get along and not fight over water-Lovejoy agreed that she and Phelps would also work towards having more wells built without people having to fight over water.

Before giving the microphone to Phelps, Lovejoy took the time to thank chapter members for Phelps' time.

"Thank you for letting us use him for the next four years," Lovejoy told Leupp Chapter members.

Phelps rose to greet relatives, lifelong friends, supporters and guests of the chapter.

Clearly moved by the response he received as he approached the microphone, Phelps told the gathering that Lovejoy called him her little brother, and he appreciated that. He also thanked Chapter President Thomas Cody for giving both himself and Lovejoy time to speak at the chapter meeting.

He learned of Lovejoy's consideration of him while waiting for physical therapy in Winslow.

"I got a call from a man I've known for many years. I just see him, he works in the same building. His name is Eugene Etsitty-he asked me to come in for an interview. I told him that I didn't know, I needed to talk to my wife, Sharon, and I'd let him know what we decide."

As Phelps spoke, the rain suddenly came down in torrents.

Phelps said that he and son, Dakota, stopped by his parents' house on their way back to Flagstaff from Winslow.

"We were looking towards the mountains [in the Flagstaff area]-they were surrounded by clouds," Phelps said. "I was just reading in my Bible-I shared with Dakota that I had been reading the Old Testament in the book of Job where it talks about God speaking through the clouds. Looking at the clouds-I told my son to remember that. My throat got stuck because it was so beautiful to me."

After being interviewed in Gallup for the position of candidate for vice president, Phelps and his family drove through Window Rock and on to Jeddito, where they waited for another meeting.

"That Sunday [Aug. 13], I learned I got the job and I've been shaking ever since," Phelps said. "I believe there is a good reason I've been selected for this position."

"I thank all my clan mothers, clan fathers, maternal and paternal grandparents - any who have assisted in raising me. Thank for disciplining me," Phelps said, his voice heavy with emotion. "Thank you for talking with me and keeping me straight. I am fortunate to have been raised in this way."