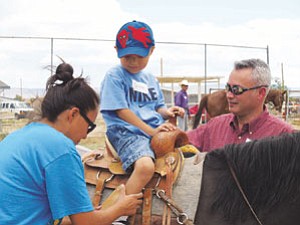 TOHATCHI, N.M. - Spurred on through her personal experience rodeoing, which taught her "…rodeo is considered to be the number one sport on the Navajo Nation," this summer Glorinda Curley, community involvement specialist for the Navajo Nation Youth Opportunity Program instituted the first equestrian training workshops offered through the agency.

"I've been involved with rodeo and I've observed the way people help each other," Curley said. "People are always very encouraging and always had something positive to say."

On June 30 and Aug. 11, 60 youth, ages 5-25, participated in the new Life Skills session on the baseball field in Tohatchi, N.M. - one of the numerous courses offered through the Youth Opportunity Program.

"The programs are designed to where students are able to rely upon themselves and the students are confident about what to ask for," Curley explained. "It's really neat to see them develop and then come back with confidence."

The daylong workshops were conducted by eight-time all-around rodeo world champion Ed Holyan (Diné originally of Coyote Canyon, N.M.). Holyan is also a certified Life Coach - an asset, which enabled him to incorporate the philosophies of the Six Pillars of Success and the Circle of Excellence into the equestrian clinic.

The six fundamental elements include respect, fairness, caring responsibility, trustworthiness and citizenship. Curley explained that by discussing these qualities throughout the day's activities the students were motivated to do their best and hopefully to apply the six elements to their lifestyles.

The day began with an introduction and discussion of the six elements. This was followed with a demonstration of how to approach a horse, then how to groom a horse, how to saddle a horse and finally, how to mount and ride a horse.

Through these sessions, Holyan made suggestions and corrections to ensure the students understood and, perhaps more importantly, to inspire confidence in their skills.

"It was really neat, too, how he came in and made corrections," Curley remembered. "In our culture here on the Navajo Reservation we're just told, 'no, don't do that,' but he showed them what to do and explained everything."

In the morning, the students were apprehensive around the horses, but as the day progressed, they became increasingly more at ease and excited about touching the real horses, Holy Smoke and Rebel.

"They were taught to say, 'I'm here; it's okay,' as they were touching the horse," Curley said. "Then they started to go to the rear [of the horse] and before you knew it, they were really natural!"

When the students had their chance to ride, everything they had learned fell into place and several dreamed of their future with horses.

"They were scared at first - kind of anxious," Holyan said. "But at the end of the day, they didn't want to stop."

"They just wanted to ride and ride," Curley said. "One kid got on the horse and said, 'I want a horse!' "

Holyan said he decided to offer the workshops to share his love of horses with the children as well as his tragic experiences and feeling that resulted when he did not have horses in his life.

"I've been without and it really impacted my life. I neglected the importance to stay fit and stay healthy," Holyan explained. "But my love for horses made me come back."

Holyan said that during the time he stopped riding, he got caught up by negative influences and became distant from his family and culture. When he decided to revisit his life with horses, things changed.

"It caused my family to support me, because this is a family tradition and it goes way back. That's part of our culture," he said.

Curley agreed. "I believe this training promotes our culture, because we value horses as sacred beings," she said.

Both Curley and Holyan said that by offering equestrian workshops that inspire confidence, responsibility, respect, trustworthiness, citizenship and caring, youth have an alternative to negative activities. They have an activity to feel proud of through which they can feel pride in themselves.

"It gives them a chance," they said.

For more information about enrolling in any of the Youth Opportunity Programs call 928-729-4449.