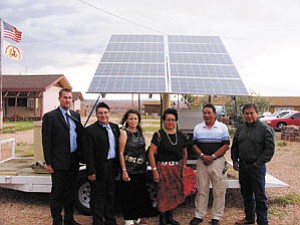 CAMERON - As rain clouds and showers blessed the Cameron area on Aug. 24, more than 100 chapter members celebrated the efforts of Rayola Werito and David Melton that secured funds for 100 solar panels soon to supply energy to local residents lacking electricity.

Werito, who serves as the Community Service Coordinator for Cameron Chapter, told attendees that the chapter had originally requested 300 solar panels.

"The application was a partnership between David (Melton who is the owner of the Sacred Power Corporation out of Albuquerque, N.M.) and the Cameron Chapter," Werito said. "He put in an application on behalf of Cameron Chapter to the United States Department of Agriculture's Renewable Energy Program. In January of 2006, we got word we were to receive $1.9 million.

Werito told chapter members that individuals could still apply for a solar system.

Chapter President Jack Colorado said that Cameron Chapter is in need of the service.

"We have Arizona Power Service lines running right through our area, but APS ran out of its contract with the Navajo Nation," Colorado said. "Since then, there have been no service line extensions to the residents of Cameron Chapter.

"We have these transmission lines - about six of them - running through the chapter," Colorado said. "Where are they taking that power to?" To Phoenix, Nevada and California - we don't get service from those power lines. It's frustrating experiencing something like that - people living without electricity when there is electricity running right through their yards. We've been researching how we could get electricity to our Cameron Chapter area. First, we recommended that the Navajo Tribal Utilities Authority (NTUA) work out something with APS - something like NTUA take over the APS line so that maybe we could get service to our homes. That hasn't worked out."

The fact that much of the chapter lies in the Bennett Freeze area - a freeze that has prevented construction and repair to residents for about 35 years - has not made the chapter's search for electricity any easier, Colorado said.

"This is [another reason] why we haven't gotten these services out here - things have been at a standstill for Cameron Chapter," Colorado said. "Thanks to Sacred Power, we are going to have electricity finally."

Werito explained that Cameron lies in a crossroads for major electric transmission lines.

"The chapter is in the Arizona Public Service (APS) territory and is served by APS," Werito said. "Despite the electric power carried through the chapter's lands, a large proportion of the chapter's homes do not have electricity - particularly in the Bennett Freeze area. The local power lines extend no more than a mile from U.S. Highway 89 and AZ Highway 64 corridors."

Werito quoted a 2003 Sandia Laboratories estimate that 18,000 homes throughout the Navajo Nation lack electric services - and said that Cameron Chapter suffers a higher than average proportion of homes without power.

She said APS power lines providing local service to the chapter are part of a major electric distribution grid originating in the Flagstaff area and are not connected to major lines that meet at the Moenkopi switchyard.

"The major grid that traverses the chapter, without a direct connection to the chapter, includes two 500-kilovolt electric power lines supplying power to the Navajo coal-fired generating station southbound to the Phoenix area."

Werito pointed out that that the Salt River Project operates the Navajo generating station, located in Lechee Chapter, and that SRP is one of six partners on the project including APS.

"Another 500 kV line owned by APS traverses the chapter from east to west, carrying power from APS's Four Corners coal-fired generating station near Shiprock, N.M. In addition, a 345 kV electric transmission line of the Western Area Power Administration (WAPA) of the U.S. Department of Energy carries power southbound from the Glen Canyon hydroelectric unit operated by the Bureau of Reclamation, with its power marketed by WAPA."

Considering these facts, it is ironic that Cameron residents do not have power, Werito said - thanking Melton for the hard work he had expended on the application.

"Blessings like that are really huge," she said. "You don't get that very often."

Phelps said he faced similar challenges in his work for Navajo Nation Social Services and there were never enough resources to serve all the families who needed help.

"Leadership has to confront and challenge these factors. They must turn adversity into something positive. This is why we appoint leaders," Phelps said.

Melton, from Pueblo of Laguna, introduced himself as a member of the Road Runner Clan, and thanked Colorado and Werito, along with Cameron Vice President Teddy Bedonie and Chapter Delegate Evelyn Acothley, for inviting him to work on the project,.

He went on to congratulate Lynda Lovejoy and Walter Phelps for their position as candidates for president and vice president. Melton said that Lovejoy was a great friend of Indian people throughout her political career in New Mexico.

"She is our commissioner with the New Mexico Public Regulation Commission. This is a very important position. She also served as a New Mexico state representative for 10 years," Melton said. "Now she and Mr. Phelps are going to be elected president and vice president. I wish you good luck."

Melton went on to introduce Michael Elliot, who will serve as the Cameron program manager - then explained how people would be chosen to receive a system.

Melton said the application bid was very competitive, and he felt very blessed to have received the award.

Sacred Power designed the system with 800 watts of photovoltaic - or solar - power. It also features a 400 watt wind turbine as well as a refrigeration and lighting package.

"People can run televisions, vacuum cleaners and other appliances for monitored periods of time," Melton said. "But the systems are primarily intended to provide refrigeration, lighting and access to satellite internet. All of these uses will improve the lives of Cameron residents."

Melton said that unfortunately many Native Americans are afflicted with diabetes, and that diabetic medicines must be refrigerated. The refrigerator that would come with each package will use only 13 watts per hour. Further, Cameron students would enjoy improved study benefits.

"Another use we thought of is that the internet would allow artisans to sell their rugs, jewelry, basketry and other items. If you are an artisan, you could have a web page and sell your arts and crafts for full retail price," Melton said.

He went on to explain that he had visited a gallery in the area, where a large rug was on display was estimated to sell for between $20,000 or $40,000 thousand, pointing out the maker would receive far less.

"So who is making all the profit?" Melton asked. "The trading post - it's the same thing in Gallup - the trading post makes the profit. With internet, you can reach buyers in Japan or in Germany. They will be the one to pay $40,000 to you - UPS and FedEx can come to you and you can ship directly to buyers."

Chapter members would also see economic development through the jobs - both temporary and permanent - that the installation and maintenance of the solar systems would require.

"We will create jobs here, we will hire a subcontractor who knows the language, knows the community, people and electricity. He will also hire people to help him install 100 systems," Melton said. "We have been blessed by the Great Spirit to be able to do this. This is Indian people helping Indian people."

Bedonie and Acothley spoke about the hardships facing Cameron residents.

"We are long overdue in getting electricity to Cameron," Acothley said. "Even with the APS power lines in the area, it's been 24 years without extending those services to Cameron."

While the discussion continued, the power suddenly went out - causing a good deal of laughter.

The power quickly returned, and one young mother rose to introduce herself as one of the people who would receive a solar system.

"I didn't expect to get a system," she said, holding back tears. "It is difficult for us - it is hard for my children to do homework. I have to get their clothes ready before it gets dark. One time we got home late and I had to hold a flashlight up for my daughter to do her homework. I realized I had to do something. I'd like to thank all of you for your hard work. It really means a lot to me."

Another resident spoke on behalf of her elderly mother.

"I would also like to express my appreciation," she said. "This is a new era and I'm very thankful about it."