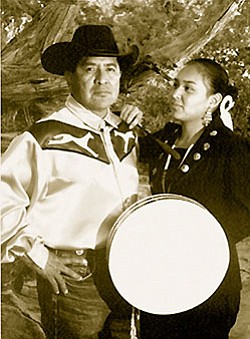 GALLUP, N.M. - This weekend, start your holiday festivities by attending the father/daughter performance at the Gallup Performing Arts Center. The concert will take place Friday, Dec. 1 from 7-9 p.m.

Jay Begaye is a true testament to a philosophy that he taught his students as a teacher at Ganado Middle School.

"Art can take you to a place you never dreamed," is his philosophy and if people wanted proof, well... he's living it.

Jay, a talented singer with a gift for song composition, is a successful solo performer traveling to various parts of the country, the Navajo Nation, and throughout Indian Country. He is also lead singer of a northern style singing group, the Catheral Lakes Singers.

He was raised in the Steamboat Canyon area where at a young age he discovered his love for singing while participating in traditional Navajo shoe game, which is only played during the winter solstice.

The songs sung during the competition captured his ears.

"I was told that those songs, those old songs, were created by the animals," he said, referring to the animals that existed in the Navajo Creation stories. "I was really inspired by the sounds of it and the stories the songs told."

After graduating from Ganado High School, he went on to attend Yavapai College in Prescott where he studied art. On the weekends he delved into one of his pastimes, bull riding at various rodeos throughout the region.

In 1980, while attending a powwow at Brigham Young University his love for singing erupted like a wildfire, thanks in part to one of the drum groups participating in the event -the Snake River Singers. Watching this northern style sing at the powwow fueled his desire to learn all about the art of singing.

After graduating from college his quest for knowledge ignited. That's when he found a mentor in Arlie Neskahi, lead singer of the White Eagle Singers.

The White Eagle Singers have also influenced drum groups the Black Lodge Singers, Blackstone, and Eyabay, who began using their tribal languages in their songs.

"The way we sang it in White Eagle, we sang it like prayers," he said, noting that the Navajo language is a descriptive language.

As the White Eagle Singers moved on and singers drifted into their personal lives, Begaye then founded the Cathedral Lakes Singers while living in Keremeos, British Columbia in 1988.

That was only the beginning. From 1988 to 2000 the Cathedral Lakes Singers, who became widely known for their Navajo word songs, traveled throughout Indian Country. The group was riding on the success of their original style and songs.

"I'd say about 90 percent of the songs we sing I composed," he said. Other singers in the group also composed songs. His drum group recorded six fulllength albums.

After finding success, Begaye wanted to perfect his songs and record music so that people could understand and their the words.

"In powwow, everybody in the group is singing," he said. "Sometimes it's hard to hear what is being said."

That is when his solo career began.

Begaye moved back to his homeland after 14 years as his solo career progressed. He started teaching art at Ganado Middle School while continuing his solo venture. Four years later he had to leave teaching to fulfill the demands for appearances and performances.

His solo efforts received Native American Music Awards nominations in 2001 and 2005. This is not the end. His gift for song making continues to captivate his audiences and he looks to make more music.

"I believe that songs are spirits," he said. "That's why when people hear my music, it touches them. It heals them. That's the spirit in the song. That's the path the Creator has set for me."