An impressive 60th year for the Winslow Christmas Parade 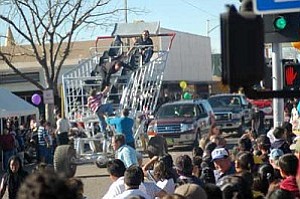 The giant shopping cart once a tradition in the Winslow Christmas Parade is now modernized thanks to Rodney Rucker of Winslow who built the cart above; capable of seating six people and driving down the street.

This year's Christmas Parade was huge as approximately 15,000-20,000 people packed the streets around downtown to once again be a part of this tradition, which just completed its 60th year.

It is Winslow's biggest event as 69 parade participants made their way through the crowd-lined streets filled with fry bread tacos, green chili burritos, kettle corn, Native American jewelry, balloons, and those little exploding things kids like the throw around.

Many unique floats appeared ranging from a giant shopping cart with a huge car engine to a crucified Jesus Christ riding inside of a BNSF train engine. The young Apache dancers appeared to be a crowd favorite, and so were the Shriners in their little cars.

For the best in their category, the following were honored: