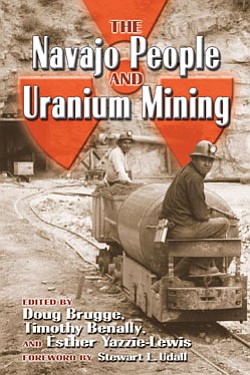 ALBUQUERQUE, N.M. - The legacy of uranium mining is devastating to Navajo communities in the western U.S., where 1,000 abandoned uranium mines still mar the landscape. A new volume from UNM Press entitled, "The Navajo People and Uranium Mining" is the result of the ten-year Navajo Uranium Miner Project headed by Tufts University's Doug Brugge and Navajo activists. Brugge and Navajo speakers Timothy Benally and Esther Yazzie-Lewis interviewed miners and drew from clinical and historical sources to trace the cultural, legal, and biological effects of Leetso, the "yellow monster."

The lure of uranium mining as a profession for Navajos is not difficult to understand. After the stock market crash of 1929, Navajo men found work off the reservation working on the railroad and on farms in Phoenix and California. Then during WWII, many Navajos went into the military. So when the U.S. entered the nuclear age and uranium was found on Navajo lands in 1941, Navajos who'd been working afar were happy to work close to home.

Uranium mining in the Four Corners area provided much-needed income, and thousands of Navajos worked in the poorly ventilated, unsupervised camps. Accidents were common, and the miners breathed in uranium dust and drank contaminated water regularly. The boomtown atmosphere caused secondary problems-violence, domestic abuse, alcoholism, and the disruption of traditional living arrangements. The mere act of mining defies Navajo culture, which opposes damaging the earth with metal instruments. So while mining provided economic opportunity, it went against the very grain of Navajo life.

In 1960, widows and children of miners killed by uranium-induced diseases began speaking out about the government's misinformation campaign.

"The Navajo uranium miners and their families were literally sacrificed to help the nation prevail in the Cold War," writes Stewart Udall, former secretary of the interior, in his foreword.

Finally, in 1990 the Radiation Exposure Compensation Act was passed, calling for government compensation to families devastated by uranium mining. Then in 2000, RECA was amended to correct its previous shortcomings.

In 2005, Navajo Nation President Joe Shirley signed the Diné Natural Resources Protection Act law, banning uranium mining on the reservation. Finally, justice has been served to miners' families, though the critical issues of healthcare compensation and the physiological effects of exposure remain.

Editors of The Navajo People and Uranium Mining are Timothy Benally, Esther Yazzie-Lewis, and Doug Brugge. Doug Brugge has a PhD in cellular and developmental biology from Harvard. He is associate professor in the Department of Public Health and Family Medicine at Tufts University School of Medicine in Boston, where he is director of their Community Research Center. Brugge has worked with neighborhoods in Boston and with Native American communities in Oklahoma and New Mexico in identifying public health dangers. Timothy Benally, a bilingual Navajo, is retired as director of both the Office of Navajo Uranium Workers and the Uranium Education Center at Diné College in Shiprock, New Mexico. Esther Yazzie-Lewis, of Edgewood, New Mexico, is a bilingual Navajo, and official interpreter for the U.S. Federal Court System.

The Navajo People and Uranium Mining is available at bookstores or from the University of New Mexico Press. To order, please call 800-249-7737 or visit www.unmpress.com. Royalties from the sale of this book support the Navajo Uranium Memorial.