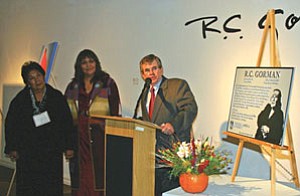 FLAGSTAFF - Northern Arizona University celebrated the life and work of the "Picasso of American Indian art" with the opening of a month-long commemorative show honoring the late R.C. Gorman.

Featured works are from the NAU-owned Gorman collection and borrowed pieces from collectors, family and friends, including Gorman's Navajo Gallery in Taos, N.M. Also on display are three paintings Gorman was working on at the time of his death and a wall of photographs from his life, including pictures of him with such notables as Andy Warhol, Elizabeth Taylor and Arnold Schwarzenegger.

The menu at the opening reception included recipes from Gorman's book Nudes and Foods IV: The Millennium Edition.

Rudolph Carl Gorman was born in Chinle on July 26, 1931. "I was raised on the reservation, and we didn't have very much," Gorman once told the Los Angeles Times. "The only thing I had to go on were books on artists, and I went through the whole gamut. My favorites were artists like Rembrandt and Michelangelo and Van Gogh. Up to Picasso."

Gorman, who died Nov. 3, 2005, is considered by many to be the premier Native American artist. It was the New York Times that called him the "Picasso of American Indian art." He first showed his work professionally in 1965 and three years later became the first Native American to run his own fine arts gallery. He has since earned an international following for his distinctive lithographs, bronzes, oil paintings, ceramics and silk screens that have been shown around the world.

"R.C. Gorman was a friend to Northern Arizona University for many, many years and we're honored and delighted to be a part of this celebration," said NAU President John Haeger. "I hope that all of Arizona has a chance to visit this show and share in Mr. Gorman's creativity."

Gorman attended NAU in the 1950s and was presented with an honorary doctorate of humane letters in1990. In 1999 he earned NAU's Centennial Alumni Award for Achievement.

Several of Gorman's works already are on display across the NAU campus, including the Code Talker in front of the Blome building. The bronze sculpture was dedicated in 1995 as part of NAU's centennial celebration and is modeled after the artist's father, Carl Gorman, who was one of the 32 original Navajo Code Talkers. Natoma II, Gorman's six-foot bronze of a Native American woman, greets visitors at the inner entrance of Old Main.

During the opening reception, Haeger dedicated a plaque for the Natoma II bronze.