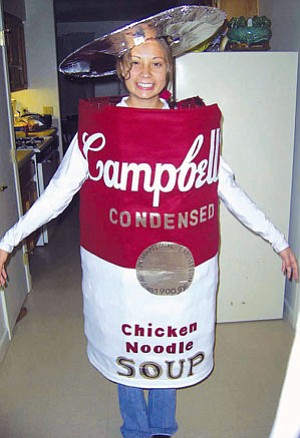 TUBA CITY - Tuba City High School's National Honor Society wanted to get their annual canned food drive off to a flying start this year, and that is exactly what happened with a special Campbell's Soup Can surprising local community members and businesses to request donations of canned items.

Kirsten Nelson, an NHS member, put her finely-honed sewing skills to use in creating a special outfit to be used in this year's canned food drive to heighten interest in a community activity while also creating some fun for the students involved.

With Thanksgiving Day just around the corner, the Tuba City High School NHS members collected a record 112 cans of food with 1,700 ounces of additional foodstuffs this year. It will all be used in St. Jude Church's special one-day meal for the Tuba City and Mungapi community members during the Thanksgiving break.

Ira Mexicano, known as the stellar math teacher at TCHS, is the sponsor for the NHS Club. He was thrilled with the NHS students' enthusiasm and their apparent understanding of what it takes to assist fellow community members with a character-building project such as this.

Mexicano stated, "All of these special community projects are really about the students [and] their willingness to pitch in, to [build character]. I am so honored to work with them, and that is why I continue to serve as the NHS sponsor. Kudos to my NHS students who did all the collecting and delivering of these items that will be used by the St. Jude's Church in its holiday meals for our needy community members."

For more information about NHS student activities at Tuba City High School, contact Mexicano at 928-283-1047 or at the Tuba City District Public Relations Office at 928-283-1072.