Clear Creek Aviation explains why their proposal would be best for Winslow
Wealthy backers of a proposal to bring in many new economic opportunities into the Winslow Airport, question why they were not welcomed with open arms. 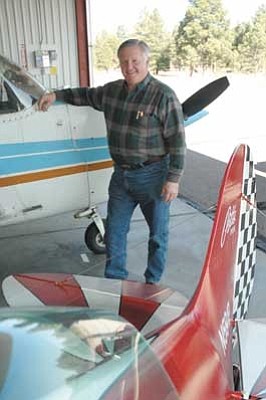 Larry Deibel with his plane at a hangar in Flagstaff

The deadline was up last Monday for the Request for Qualifications for a new Fixed Base Operator for the Winslow Lindbergh Airport. Five groups applied on this second round for finding a qualified applicant.

One of the applicants, Clear Creek Aviation, had an exemplary proposal, but during CCA's first attempt to apply, the Airport Review Committee doubted some of their qualifications and recommended to City Council that the city look for another FBO.

CCA would like the people of Winslow to know what they are proposing because they feel the economic opportunities tied into their proposal could benefit the community's reputation, value as a destination and overall economy. CCA said they are concerned about inherent bias on the Airport Review Committee, who they feel are against the proposal for personal reasons.

Winslow stands to gain much in attracting visitors, employment, and reputation by embracing CCA's plan, said Larry Deibel, a prominent Flagstaff businessman who is proposing to manage the FBO for CCA if accepted. CCA's plan states that they will fund their own operations at the Winslow Lindbergh Airport, which will include restoring the historic airport, building an aircraft museum, running a flight school and flying an upscale air tour operation throughout the southwest.

"Clear Creek Aviation's involvement in Winslow and with the airport would be a tremendous benefit to the community. I am optimistic that the Council understands this and will act accordingly."

Deibel, an owner and operator of the Jeep Dealership in Flagstaff for the last 28 years, spoke about his proposal and his shock about it being rejected. Deibel recently sold his dealership and has now partnered under CCA with James Turrell, one of America's most unique and profound modern artists who lives in northern Arizona.

Turrell is currently working on a relatively secret multimillion dollar architectural project, north, between Winslow and Flagstaff that has the potential to become world famous when complete.

Turrell moved to the area 33 years ago and chose a site northwest of Winslow for his project by scouting the landscape from above in his airplanes. Turrell is a pilot who began his aviation career working for Air America, a CIA operated aviation front that flew covert missions in southeast Asia during the Cold War. He has received world records for distance flying gliders.

According to Deibel, Turrell partnered with David Maytag (of the appliance company fortune) in the purchase of Helio Aircraft, Inc., to manufacture rare models of low-speed aircraft.

Deibel said these planes can fly down to 22 mph and can go much further on a tank of gas than most other airplanes. The low cost of the Helio has prompted some agencies, such the Pima County Sheriffs Department to purchase such craft because it can perform tasks typically done by the helicopter such as surveillance, but at a fraction of the cost.

"The wings and fuselages are manufactured by a company in the Czech Republic, but I know that Turrell and Maytag are looking for a spot in northern Arizona to do the final assembly," Deibel said. "Prescott is a possibility because it is a town with qualified workers and it is pro-business, but Turrell is partial to Winslow and thinks they could bring in and train a workforce there."

Deibel said that if the Helio Aircraft takes off and a facility is built in Winslow, it could bring in up to 40 high paying jobs to the area. The development of this unique aircraft could also attract many pilots to Winslow for training, and CCA plans to have a flight school for this and other intensified and advance training ‹ which is not offered in Flagstaff; the nearest being Kingman and Prescott.

The offering of these services by CCA would compliment an air tour plan they have; whereby, they will use vintage '30s and '40s era aircraft to fly people to famous areas with fine dining in the Southwest. Deibel said many pilots, due to their typical high incomes, commonly fly together for fun and then meet-up after landing to eat at various locations throughout their region. Most pilots say that E & O in Winslow has great Mexican food, too.

To handle the influx of older historic aircraft, CCA proposed hiring an expert on such older airplanes.

If CCA were accepted as FBO, they would bring in Larry Ely, 88, of Williams, one of the most experienced and competent aircraft mechanics in the state. Ely, though well into retirement age, would oversee and train younger mechanics at the airport. Ely was the FBO in Williams from 1946-2004, and also received the Charles Taylor Award from the FAA in 1993 that requires recipients to have at least 50 years experience in aviation maintenance.

Deibel said he is a bit upset with the "good ol' boy" mentality that he believes is opposing his proposal in Winslow, and says it is case where the interest of a few hurt the community as a whole.

During his interview with the FBO review committee, he was asked what he would think about drag racing on the runway if CCA were the FBO. Deibel said that seemed inappropriate and possibly dangerous.

Billy Hallman, an employee for the current FBO, said that some people in Winslow have been pushing to get drag racing back on the airport runway since their club stopped this practice in the late 1980s when the City put a stop to it for insurance reasons.

Norm Stewart, the current FBO, said FAA guidelines don't allow airports to be shut down for races, but that a runway can.

Another understanding Deibel got from the Airport Review Committee was that they were upset because they believe that they will have to move their own private airplanes out of the Lindbergh hangar to make room for a museum.

Stewart said he understood that some of those on the Airport Review Committee were gearing up to build their own hangar because they expected to be kicked out of the Lindbergh hangar they are using for $100 per month.

Deibel said any functional airport should have what is called a T-hangar to keep planes separated and away from each other. Rent would be paid by each plane owner and could be a revenue generator for the city. He said that by separating planes, liability can be reduced. Average costs for rent in these is over $100.

"Someone in the Lindbergh hangar now has a real nice plane that probably cost about $400,000," Deibel said. "If they can afford to spend that much on their airplane then they should be able to spend a little more to appropriately store it."

"I think we could make something out of this airport in Winslow, but it is a little discouraging to run-up against local politics," Deibel said.

He did not understand why the review committee turned down the CCA proposal and then asked them to come back and do it again when CCA knew their plan was solid the first time.

"It makes us feel like we're being horsed around," Deibel said.