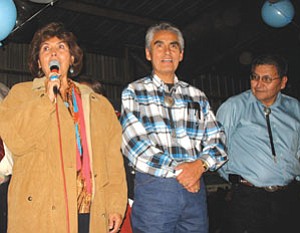 Mrs. Lynda Lovejoy offers her concession speech in Nakai Hall shortly after all 110 chapters reported their voting results. The Shirley-Shelly ticket won over the Lovejoy-Phelps ticket with a vote of 34,813 to 30,214 (Photo courtesy of Navajo Nation Office of the President and Vice President).

As in the August primary election, when the votes began to come in shortly after polls closed at 7 p.m., President Shirley and Vice Presidential running mate Ben Shelly took an early lead and never lost it.

"I want to express appreciation to the Creator, to the campaign staff who had worked very hard and very diligently, and to all the voting populace of Navajoland out there. I'll be forever indebted to them," President Shirley told the Associated Press after entering the Window Rock Civic Center where votes were being counted.

"I appreciate their vote of confidence. I think that's what it is," he said. "Of course, we worked the last four years very hard, very diligently, we persevered and we feel that we made [great] strides on behalf of the Navajo Nation. I think that's what they saw and that's how they voted. And I just really appreciate the vote of confidence from the people."

Vice President-Elect Ben Shelly echoed the President's appreciation to some 500 people who gathered to celebrate in Nakai Hall across from the civic center.

"From my heart to you, thank you," he said. "There's not enough I can say but thank you. You voted for us. You trusted our word. We know we can do it if you continue to be with us."

Shortly after President Shirley made a victory speech to thank his supporters, Mrs. Lovejoy, accompanied by her husband John, her running mate Walter Phelps, and his wife Sharon, came to the stage in Nakai Hall to concede the election to President Shirley.

"When the results are said and made known to the people, when a candidate concedes, just as I am making my concession, people come back together," Mrs. Lovejoy said. "Words that were not kind were said in the newspaper but tomorrow will be a beautiful day. To all of you campaign helpers, you ran a good campaign to get to your victory."

Almost from the time the polls closed, several hundred of President Shirley's supporters began to await the vote count in Nakai Hall where his campaign staff served refreshments and the vote would be announced as more chapters reported their tallies. By about 8:15 p.m., security personnel in the Civic Center closed the door because the facility was filled to capacity.

With just a few chapters remaining to be counted, President Shirley, Vice President-Elect Shelly and their wives, embraced by several dozen people, worked their way into the Civic Center waving campaign signs and cheering. The crowd inched about the large room as the four gave brief radio interviews. When the vote count was finished, they were invited onto the stage to address the filled-to-capacity audience.

Afterward, the Shirley-Shelly supporters returned to Nakai Hall to celebrate their victory for the next two hours, singing what's become President Shirley's unofficial campaign song, "Navajo - Number One Nation" with the song's creator Frankie Lopez and the entire audience.

"I'm just so elated, I'm just so happy, I don't know what to do with myself," the President said. "We made another history. I think it's a vote of confidence from the people."

"Some people disagreed with it, but the majority say we're leading the Nation in the right direction," he said. "You and I know that there's a lot of work ahead of us. We've made a lot of accomplishments."

The President thanked what he called his "super campaign staff," particularly co-campaign managers Lena Fowler and Patrick Sandoval, as well as the agency committees and their chairpersons. "We couldn't be beat with the team we had in place," he said. "Without you being there, we couldn't have done it."

The President said now he and his "older brother," Mr. Shelly, will roll up their sleeves and get to work.