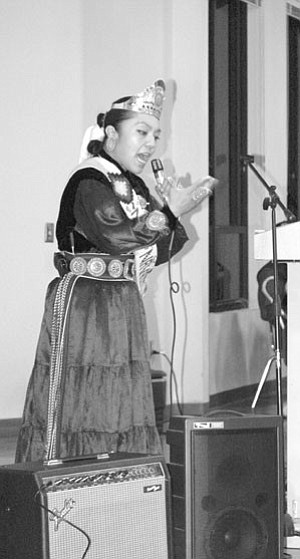 "It is great to have one day for the city, but people need to remember that this building, this school and this whole city was built on traditional Hopi and Navajo land," Affeldt said. "Winslow needs to do better in recognizing that all tribes in this region from the Hopi and Navajo to the Apache and Zuni, live here too and make up an important part of this beautiful region."

Miss Navajo Nation Jocelyn Billy, a graduate in Political Science and Indigenous Studies from Northern Arizona University, spoke with the all Native American crowd about social problems and individual solutions for Native people. She was a confident and powerful speaker.

She said it saddens her to see children born into families who do not care.

"It is the children who sufferŠand I go through so communities that suffer and the people are suffering." she said.

Billy said the Navajos are losing their traditions and values and kids are now measuring their parents' love by the clothes they buy and cars they drive.

Billy shocked the crowd when she said she met a pregnant girl recently. A mother asked for Billy to speak with her pregnant daughter, but Billy found out that the girl was 12-years old at the latest stage in her pregnancy. Billy chastised the mother for not spending time with her daughter to teacher her enough to keep her out of that situation.

"We need to educate ourselves and you should be responsible and have the initiative and motivation to know what you have to do to be that beautiful person you need to be," Billy said.

The crowd erupted in applause.

Billy told the youth to take their life seriously and to not worry so much about what friends think because otherwise you may end up saying "I would'a, could'a, should'a."

"There are thousands of boys and girls out thereŠThe one thing there is little of is opportunity, for things like scholarships, travel and experience," she said.