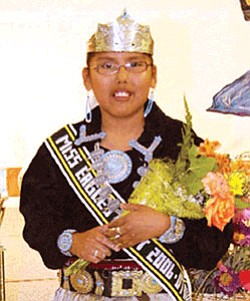 Tashina Bennett pauses after winning the title of 2006-2007 Miss Eagle’s Nest. She will represent her school at local community events (Photo by Byron Poocha).

TUBA CITY - Tashina Bennett, of the Deer Water clan, is the daughter of Tiffany and Bryan Bennett. She is a fifth-grader at Eagle's Nest Intermediate School in the Tuba City District.

Bennett won the title of 2006-2007 Miss Eagle's Nest and will represent her school at local community events. She won this special crown based on her knowledge of Navajo traditional cooking skills.

The new Miss Eagle's Nest is joined by her royal court of, First Runner Up Bobbie Benally, Second Runner Up Shanisha Sloan and Third Runner Up Santianna Begay.

A total of eight young women vied for this year's crown.

To invite the new Miss Eagle's Nest to your community event contact Mrs. Billsie at the Eagle's Nest Intermediate School at (928) 283-1043.