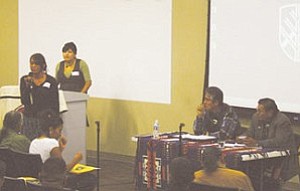 FLAGSTAFF - Each semester as part of their elected duties, Northern Arizona University senators must hold a candidate forum. To fulfill this charge and also satisfy the desires of the NAU Native American Business Organization, ASNAU Senator for Social and Behavioral Sciences Kimberly Smith coordinated the Rock the Navajo Vote Forum.

Smith planned the forum to include individuals running for the offices of Navajo Nation president and vice president. Lynda Lovejoy and running mate Walter Phelps, as well as current Navajo Nation President Joe Shirley Jr. and Vice Presidential candidate Ben Shelly were invited to the candidate forum held Oct. 23 at NAU's Gardner Auditorium in the College of Business Administration building.

Smith, a senior in applied indigenous studies, explained her intentions for the forum.

"I wanted to encourage youth involvement in the voting process. There's a large population of Navajo students at NAU, and not only that, but there are a lot of indigenous and other people in Flagstaff who have been involved with environmental issues who are interested in the Navajo Nation campaign," she said.

However, due to scheduling conflicts, Lovejoy and Phelps were unable to attend.

The Rock the Vote Forum consisted of questions posed by a five-member panel, Smith and the audience.

The first question came from panelist Wahleah Jones from the Black Mesa community of Forest Lake who works with the Black Mesa Water Coalition to address water depletion and natural resource extraction.

"I applaud you for standing up for the Sacred Mountain in the West…your ban on uranium mining for the entire Navajo Nation," she said.

Jones explained the disrespectful use of water by mining operations and asked, "As our leader of our administration, how are you going to respect the wishes of grassroots people who object to the use of the C-Aquifer?"

Shirley responded to the question by stating, "To the best of my ability I'd like to bring jobs to the Navajo Nation."

He explained that in the past, mining and power companies lied to the Navajo people and made false promises.

"I say, 'It's okay for you to mine the coal, as long as you tell me the truth.' The water is a resource; it belongs to all the people. My job is to get jobs for all the people," Shirley said.

"Prayerfully, it will begin immediately," Shirley said. "There's nothing wrong with Hopi and Navajo people getting along. That's the way it was before the Long Walk - at least that's the way it was told to me. Hopefully we'll be able to see those fences come down, and that land should never be frozen again."

The next panelist, Danita Davis, a research assistant in the NAU Native American Cancer Research Partnership and mother of two, inquired as to what the Shirley/Shelly administration's relationship is with the three Arizona state universities. She explained that a large body of Native American students is currently pursuing advanced, sophisticated degrees and deeply desire to return to the Navajo Nation to use their degrees. However, they are disheartened that no potential employers exist on the reservation through which they could use their knowledge.

Shirley responded. "I think that's something that needs working on. We need to work out a mechanism by which bureaucracy and what you call 'red tape' is done away with [so Navajo professionals can return and perform research on the reservation]."

Davis then said. "I've been asking around and asking other students what to ask and they said that they feel discouraged by the current administration - that the only viable resource on the reservation is casinos - and they don't want to come back and be blackjack dealers," Davis said. "What alternatives can you offer to us besides gaming to encourage us to come back to the reservation?"

Shelly encouraged Davis to continue her studies, because the Shirley/Shelly administration is looking for ways to develop the Navajo Nation.

"We need doctors. We need lawyers. We need all the professionals," Shelly said. "The Navajo Nation is changing. It is our goal to have a sovereign nation."

He then detailed the current advances in technology including automobiles, wind and solar energy.

Tony Skrelunas, a panelist who is currently the Native American Program director with the Grand Canyon Trust and formerly the executive director of the Navajo Nation Division of Economic Development, later discussed the leakage of dollars spent on the reservation to off reservation locations. He asked what types of sustainable development the Shirley/Shelly administration proposes to retain these funds and at the same time conserve the land.

"It seems the economic status quo has been to promote power plants, development and casinos sometimes at the expense of traditional values," Skrelunas said.

Shirley explained that creating entrepreneurship is his goal, whether it is large businesses or individual artisans. He said that in order to attract and maintain business, modern technologies such as electricity, high-speed internet, etc. need to be installed throughout the nation.

"One of the biggest things is the infrastructure…. We need money big time and that's what this administration is working on," Shirley said. "As far as casinos and power plants, my charge is to try to get us standing on our feet."

Additional information about the Shirley/Shelly platform is available on their website at www.reelectjoeshirleyjr.com, or by calling campaign manager Lena Fowler at 928-606-3962.

According to the Lovejoy/Phelps website, http://www.lovejoyphelps2006.com, if elected, the pair pledges to:

- Act to restore the people's voice in government;

- Fight for wise use of the people's money;

- Create jobs for the people;

- Guard the people's land and water resources while strengthening communities;

- Ensure a prosperous future by investing in our Navajo children;

- Stand firmly on what is right and just for the people.