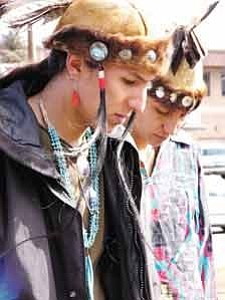 FLAGSTAFF -- An incident following a May 10 Flagstaff candidate forum has set off a chain of suspicion rehashing past events over the volatile Arizona Snowbowl artificial snowmaking issue. It has further divided the players, leaving members on both sides of the issue saying they feel frightened, insecure and dehumanized.

Flagstaff Mayor Joe Donaldson participated in the forum, sponsored by Native Americans for Community Action, and afterwards granted an interview with photojournalist and member of the Save the Peaks Coalition Clayson Benally. Following the interview, which ended cordially, Donaldson exited the Museum of Northern Arizona to find a toilet bowl -- complete with a deposit of what is believed to be urine -- atop his vehicle. The bowl was carefully placed on a towel, and bore a sign reading, "How do you like it Joe?"

The action, clearly a political message referring to what many opponents of the artificial snowmaking have likened to urinating on the mountain sacred to 13 Arizona tribes, left Donaldson shaken.

In a telephone interview on May 16 -- hours before learning of his re-election -- Donaldson said that the incident had upset and frightened him.

"It made me feel vulnerable that someone could stalk me -- lay in wait for me -- that something like this could happen in this community," Donaldson said. "It did frighten me -- for my sons, my grandchildren and my wife."

Donaldson said that he did not link the action to any one person or group.

"I am leaving that to the police to determine who was responsible. I haven't thought about who it might have been," Donaldson said. "In the 38 years I've worked, I've learned not to judge a book by its cover."

Describing himself as a person who enjoys his privacy and who moves about the public at will, Donaldson said that the toilet bowl incident has made him more aware of his surroundings.

"It [snowmaking with reclaimed water] is a very hot topic with lots of emotional baggage," Donaldson said. "I am trying to remain neutral in my comments about it. The issue is now in court, and it's up to the court to make the decision. I will abide by the court's decision."

But, Donaldson said, the event has led to heightened police security for himself and his home.

"That is unfortunate. I think it is a waste of money and time that our police officers could be out protecting our neighborhoods," Donaldson said.

Donaldson said that a comment made by local activist Kelvin Long -- director of ECHOES and a member of the Save the Peaks Coalition -- on the evening of the forum touched a nerve. Donaldson took Long's comment that he would not be mayor anymore as a threat.

Donaldson had referred to that interview in the news report, and mistakenly remembered Long's comment as happening after Clayson Benally's camera had been turned off -- however footage shot by the photojournalist showed that in fact it had been made during the interview. That mistake in the news story, added with others, upset members of Indigenous Action Media and the Save the Peaks Coalition.

"Donaldson seems to be fabricating facts of the situation in an attempt to implicate the independent media videographer and a member of the community with an act of vandalism," Klee Benally said. "Is this responsible behavior?"

Donaldson remembered Long from an earlier incident when the activist had delivered petitions to his office -- and said that Long had been clearly angry when he had tried to explain that he was in between meetings and could not take the petitions at that time.

"I took the time to take the petitions from him to prevent him leaving upset," Donaldson said.

Nonetheless, Donaldson took offense at Long's behavior, saying that he knew Long would not have tried to enter Navajo Nation President Joe Shirley Jr.'s office, or Arizona Governor Janet Napolitano's office in such a manner.

Who is watching whom?

In a press release of May 13 from the independent press organization Indigenous Action Media, Clayson Benally called the toilet incident "disrespectful," and that he understood why Donaldson would be upset.

"I can actually relate to Joe," Clayson Benally said. "After all, this is what Snow Bowl and the city of Flagstaff is trying to do to our church."

Klee Benally also opposed Donaldson's statements during the forum that until the contract for the sale of reclaimed water to the Arizona Snowbowl was signed, there had been no public outcry against the use of that water for making artificial snow.

"I and other members of the coalition -- as well as tribes throughout Arizona -- were involved in meetings and actions before that contract," Benally contended.

On Mother's Day -- May 14 -- in what Benally and others have said is an unbelievable coincidence, Clayson Benally, Donaldson and an off-duty FPD detective were all shopping at a Flagstaff grocery store. Benally purchased food for a family picnic to be held at his parents' home in Doney Park. Exiting the store, Benally found that he had locked his keys in his car -- they were hanging in plain sight in the ignition. Benally said that he called AAA for a locksmith, and then sat on his car to wait for assistance, along with his grocery bags in plain sight.

Two police cars suddenly turned into the parking lot and converged on Benally.

"As they were questioning me, I saw Mayor Joe Donaldson walk past," Benally said.

This led Benally to believe that the mayor had called the police on him. That belief, and a news story in a local newspaper that had Donaldson linking his post-forum interview to the toilet "incident" left Benally suspicious that the mayor was targeting him.

"The police officers were sympathetic to my situation and tried to be helpful," Clayson Benally said. "At one point, I mentioned the toilet bowl incident that had occurred earlier, and asked if my being questioned was related to that. I was told that it was 'potentially what this is about.'

"We have worked with the community for positive change. Everything we have done is in a positive direction, with respect and spirituality," Clayson Benally continued. "Being approached in this way was shocking and dehumanizing."

"In hearing my brother's story, I had to wonder if things were being fabricated to implicate Native American members of this community in the toilet bowl incident," Klee Benally said in an interview on May 17. "We were in the forum the entire time, and left the forum after my brother interviewed the mayor. This was not the action of the Save the Peaks Coalition. I have to wonder if this is an attempt to criminalize Native Americans or the independent press in this community."

On May 17, the Observer reporter left a written message to the Mayor with one of Donaldson's staff members asking had he indeed called the police on Clayson Benally. (Donaldson was not in his office to receive the question himself.)

In answer , Donaldson asked Lt. Josh Copley of the Flagstaff City Police Department to respond to the Observer. In a telephone interview on May 18, Copley said that the mayor had not called the police on Clayson Benally, and, in fact, did not even know about the incident until he exited the store and saw the police questioning the young man.

According to Copley, an off duty detective, Casey Rucker, was shopping at the same store with his family, and Rucker had passed the mayor in one of the aisles. As he left the store with his family, Rucker spotted Clayson Benally sitting on the trunk of his own car, and according to Copley, thought he was closely watching the entrance of the store and also the mayor's car.

This triggered the detective to make the call regarding a suspicious person--and, Copley said, the mayor himself knew nothing about the incident until he was leaving.

"I can say with certainty that the mayor had no involvement in this incident, and the officer was called without his knowledge," Copley said. "This kind of call is just part of the job."

"If he had said to himself, 'Oh, he's probably okay,' and found out later that the mayor and Mr. Benally had been involved in an incident--that would not have been good," Copley explained.

"If we learned that Kelvin Long or Klee or Clayson Benally had a threat against them, we would act in their protection with or without their knowledge," Copley said.

Copley said that he hoped no one--including Clayson Benally--would think of this event as racial profiling.

"If anything, as Benally is a known opponent of snowmaking, this incident might have had more to do with his politics on a very contentious issue that has polarized people," Copley said. "As police officers, we aren't for or against issues such as snowmaking. We are here to support the constitution and people's rights to freely engage in opposing discussion. We support the rights of groups like the Save the Peaks Coalition, and I feel that we have had a good working relationship with the opponents of snowmaking."

"We are on the side of peace and law," Copley concluded.

Despite the coincidences that led to Clayson Benally's questioning on May 14, what remains crystal clear is that the Arizona Snowbowl's intention to use reclaimed wastewater for snowmaking has opened fresh wounds and feelings of insecurity and mistrust among northern Arizona residents--Native American and non-Indian alike.