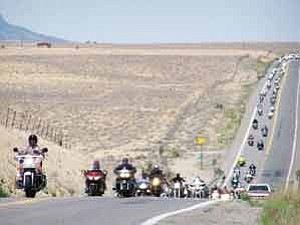 Photo by Karen Francis/Office of Navajo Nation Speaker The honor riders just a few miles before arriving in Shiprock, N.M. on May 18.

WINDOW ROCK -- Navajo, Hopi and non-Native soldiers and veterans alike were shown honor and respect for their service and sacrifice during a torch-lighting ceremony at the Navajo Nation Veterans Memorial Park under the sacred Window Rock here May 18.

As a Navajo prayer was sung over loudspeakers, Judith Young, the national president of American Gold Star Mothers Inc., led a procession of Navajo Gold Star mothers wearing new, fringed, white shawls with large gold stars around the perimeter of the park to its center where a flame was lit from the torch she carried.

Navajo Nation President Joe Shirley Jr., and Navajo Nation Council Speaker Lawrence T. Morgan then slowly carried a large gold star wreath from the steps of the park to the newly-lit flame, and stood in silent remembrance before stepping aside.

The solemn moment was witnessed by about 500 people who had come to pay their respects, including some 250 motorcycle riders who had just completed a two-day Honor Run throughout the Navajo and Hopi nations to commemorate soldiers1 and veterans' sacrifice.

Among them was numerous Navajo Nation Council delegates, Navajo Vice President Frank Dayish, Jr., and members of the organizations Carry The Flame and Rolling Thunder, a national organization that rides to promote awareness about service men and women who are missing in action or ar prisoners of war.

"Freedom is very precious and we know that freedom did not come free," President Shirley told the crowd. "It is our warriors who ensure our freedom and protect our Navajo way of life."

Prior to the wreath-laying, Young presented shawls to the mothers of eight Navajo soldiers who lost their lives since the start of the wars in Iraq and Afghanistan.

She said she hopes to create a Navajo Nation Chapter of the organization.

"While these shawls are beautiful," said Dennehotso Navajo Nation Council

delegate Katherine Benally, who served as mistress of ceremony, "they are

one we hope we never have to wear."

Young said that during the early days of World War I, a Blue Star was used to represent every man or woman in the military service of the Unite States. As the war progressed and men died in combat or from their wounds or disease, a gold star was used to cover the blue star, she said. The gold star came to represent the honor and glory accorded the person for his supreme sacrifice in offering for his country the last full measure of devotion and pride.

The Gold Star Mothers was formed in 1928 of mothers of soldiers who died.

Their mission was to unite in loyalty and love for each other, perpetuate the memory of their sacrifice, inspire patriotism and reverence for the flag and to assist veterans.

King Cavalier, president of Operation Carry The Flame, said that when the motorcycle riders first came to Navajoland three years ago to honor the late

Lori Piestewa, the first Native woman soldier to be killed in American combat during the opening days of the Iraq war, "we didn't know the depth of respect that the Navajo people shows its warriors."

He said the Navajo people gave the riders a teaching of respect that is renewed with each visit.

"And we thank you for caring enough to teach us," he said.

He said Operation Carry The Flame has two missions. One is a national fund-raising effort for an official Gold Star Mothers national monument, and the second is create scholarships for Navigating Children's Grief training courses designed to help children of military parents deal with the grief of a parent who leaves for military service, is injured or is killed. The program is to develop essential grief management skills for school principals, teachers, counselors, clergy, organizational leaders, health

care professionals and others who interact with grieving children from military families.

"We think it1s a lot better to help a child than to fix an adult," Mr. Cavalier said. "The more people we have in helping children, the better we all will be."

Among the Navajo and Hopi servicemen and women honored are: