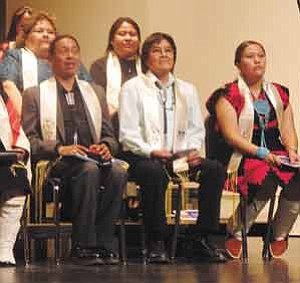 FLAGSTAFF — On May 11, Native American graduates, staff and faculty gathered at Audrey Auditorium on the campus of Northern Arizona University to celebrate their cultural heritage. Many attending the 11th annual Native American Convocation and Awards Ceremony donned their respective tribal attire.

All were acknowledged by their name, tribal affiliation, degree, clans and hometown as family friends and tribal leaders looked on.

The ceremony included a presentation of awards to four recipients:

Each graduate received a handmade sash as a commemorative gift with artwork depicting the San Francisco Peaks, Monument Valley and southern Arizona deserts. Eagles and feathers were also included on the sash to indicate the courage, persistence bravery and wisdom required for students to succeed.