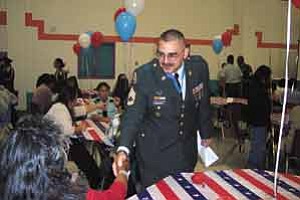 (EDITOR’S NOTE: The Daedelian Junior ROTC Achievement Award is for a cadet who has shown outstanding qualities in military leadership, discipline, character and citizenship. This year it went to Cadet Captain Andrea Daily, who wrote this story.)

This yearly event is to honor dedicated and hardworking cadets with medals, awards, citations, and certificates from the categories including national awards, Junior ROTC awards, extra curricular team/awards, and finally the special awards.

“These cadets have worked hard for their awards. They are our (battalion staff) motivation to get things done. I am immensely proud of their achievements and look forward to what they can accomplish,” said Battalion Executive Officer Valentina Shonie.

Next followed the National Anthem where all students, parents, and guests rose to give respect to their nation. Afterward everyone bowed their heads in a short prayer. A was given

Both Pinon High School Principal James Lescher and Assistant Principal Frank White gave a brief introduction. Both talked about how happy they are to have a Junior ROTC program. They both said they believe the program benefits the school greatly and know students are doing better.

After their positive remarks, guest speaker Tully Mann gave an immensely patriotic speech. He explained what freedom and service meant to him. Mann also talked about how proud he is to represent his great nation. His speech brought tears to many eyes and also his own.

Mann entered the Marine Corps in May 1970 and attended basic training in San Diego. After training, he served one year in Vietnam.

He is currently living in Pinon with his wife, Lena, who he said is one of the best math teachers on the Navajo Reservation. She has also worked at Greyhills Academy High School in Tuba City.

Mann has been teaching at Pinon High School for the past 10 years.

Soon after Mann finished, the Army Instructor Sgt. 1st Class Miguel A. Rodriguez was introduced and spoke on the differences of leader and leadership styles.

“There are great men and women leaders such as Eisenhower, Patton, Churchhill, Kennedy, and I believe we here at Pinon can add 1st Sgt. Moore to that list of famous names,” Sgt. Rodriguez said.

He talked about how 1st Sgt. Moore ran the Junior ROTC program for many years all by himself. He said 1st Sgt. Moore has done a great job, keeping this program alive. As 1st Sgt. Rodriquez was trying to finish his speech, he interrupted to regain his composure and thanked 1st Sgt Moore for helping him understand that Junior ROTC is a school class with young students, not a military branch with soldiers.

Following his speech came the presentation of awards that began with the presentation of The U.S. Army Recruiting Command Junior ROTC Award. It is awarded annually to one cadet for demonstration of exceptional leadership skills, which was Ivan Keesie.

The American Veterans of the World War II, Korea, Vietnam (AMVETS) Noncommissioned Officers Award was next and is presented to cadets indicating a desire to serve their country after graduation — this year’s recipients were Quentin Tachine, Kyle Phillip, Philena Phillip, and Cora Taylor.

The American Legion Award for military excellence is awarded to a cadet who is in the top 25 percent of his or her class in academic subjects and has demonstrated outstanding qualities in military leadership, discipline, character and citizenship. It was presented to Cadet Private 1st Class Nathaniel Simonson.

After the awards ceremony battalion staff gave a slideshow presentation prepared. “I thought is was a good banquet. I thought the food was splendid. I really enjoyed the slideshow and the way it coordinated with the music. I also enjoyed the way Mr. Mann spoke about patriotism in his speech and enjoyed to hear what Sgt. 1st Class Rodriguez had to say about 1SG Moore. I liked the decoration, the Battalion Staff did a good job setting it up,” said Cadet Sgt. Toby Charlie.

Before he left, 1st Sgt. G Moore had a few comments.

“I really enjoyed working here in Pinon,” 1st Sgt. G Moore said. “These cadets can accomplish anything they set their mind to.”