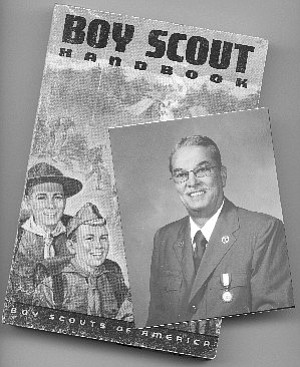 "Be prepared," is the Boy Scout motto, and prepared Lee Earl was last year when he saved a life. Earl, roundtable commissioner for the Rt. 66 district of the Boy Scouts, said the scouts may better prepare young men and that those teachings will follow them throughout their lives.

Last February 11, Earl was awarded the "Medal of Heroism" by the National Court of Honor of the Boy Scouts of America in Flagstaff, Ariz. He was given this medal for saving a life. This medal will be hung on his uniform next to another honor he has earned; the "Duty to God" medal which was bestowed upon him by the only group which can confer that award, the Church of Jesus Christ of Latter Day Saints.

Earl was with his family at an Olympic-size swimming pool in Park City, Utah, when no lifeguards were on duty. Earl was not in the water because he had not been able to swim in 10 years due to complications resulting from injuries he had suffered as a result of exposure to Agent Orange while serving as a combat photographer in Vietnam.

Earl's daughter Alicia Walker was helping her son Cole learn how to swim when Earl said he heard his granddaughter scream from the shallow end of the pool. His other grandchild, Cubbie, had somehow ended up near the middle of the pool and was drowning. Earl immediately jumped in the pool and swam 20 feet before he dove down to the bottom and rescued the drowning boy.

"When I got him out we set him down and then he started coughing and gagging up water, it was after that moment that we knew he was going to be alright," Earl said.

Earl was told his grandson Cole about the Boy Scouts and the things he used to do with them like the Sea Scouts, Morse Code and other things the scouts do less of these days. Earl said that there are still many other worthy things for kids and adults to learn or teach today with the scouts. As round table commissioner for this area, it is part of Earl's duty to plan for the activities in which troops will participate in at various camps. Camp Raymond outside Flagstaff near the San Francisco Peaks is coming soon and each month there are other planned camps for scouts to attend. At these camps, the kids are instructed in the outdoors about safety as well as things related to the LDS church.

Earl said, only LDS affiliated kids are involved in scouting from the Winslow area at the moment, but that does not have to be the case because the scouts are for all people of all religions and races.

Boy Scouts of America are for boys of many faiths and like many other civic organizations, they like to see their members dutiful to God, country and all people.

"My goal is to have an open house at the LDS church in town and invite different organizations, churches and groups like the Elks and VFW to take-up an interest in scouting," Earl said.

Typically, an organization or church will sponsor scouts to form a troop by providing adult leaders, transportation, supplies, etc.

"If a young man is to be involved in scouting then he is going to be affiliated with some other organization," he said.

Earl said scouting is a fun way to get the kids outdoors while they learn important skills that are represented by merit badges. Some of these include: astronomy, beef production, citizenship, conservation, farming, firearms, first aid, forestry, home repairs, Indian lore, railroading, salesmanship and swimming ­ to name just a few of the list of skills offered through the scouts.