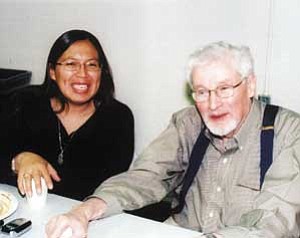 SECOND MESA, -- The Hopi-Harvard summer program is a huge success according to Harvard officials, but they want to know how they can make it better.

Hopi High School parents and students praised the Harvard-Hopi summer program during a meeting with Harvard officials March 2 at the Hopi Cultural Center.

The Harvard-Hopi program began in 2001 and made Hopi High School students the first high school students in the nation to get to take classes at Harvard Medical School during the summer.

Since 2001, Ft. Peck High School from Montana and a contingent of Hawaiian students have been added to the program.

Dr. David Potter, professor of neurobiology at Harvard Medical School, said the reason for the visit was to review what they did last summer and talk with students, parents and staff to see how the program can be improved this year.

The Harvard officials, with the input of staff at Hopi High, are also selecting 10 Hopi High students for this year's summer program.

Dr. Potter credited Hopi High School staff with coming up with the idea for this program. He said

Before this program, Harvard had its Four Directions Summer Program, which was a summer program at Harvard for Native American college students.

Dr. Potter said the Harvard-Hopi program has been a tremendous success as the Hopi High students have shown they can work at that level, and many have gone on to prestigious universities.

"From the Harvard perspective, this program has been wonderful," he said. "It makes life worth living."

Parents attending the meeting said their children, who have attended the summer program, have come home more independent and more mature.

"Without Dr. Potter's efforts, nothing would have happened with this program," he said.

Dr. Potter responded that they were able to get funding for the program because having Hopi High

School on board makes the program unique.

Superintendent Reynolds said when the program started that the Hopi High contingent was intimidated before they met Dr. Potter.

"We found out that he's a nice caring human being," he said. "To be at Harvard is the pinnacle of education academically and it shows that our students can compete academically--not just on Hopi, but in the world market."

Ken Pepion, associate vice president for academic affairs at Fort Lewis College and former director of Native American Programs at Harvard, noted that when Harvard was founded in 1636 that it was for the education of Native American students.

"It seems we forgot that," he said.

Pepion said that Harvard is rich, but that they would be poor if they didn't have the input of Native

"That knowledge goes both ways," he said. "Your students bring a special knowledge."

Howard Dennis, parent of Desire Dennis, told the students that they have a special opportunity and they shouldn't blow it.

Brian King, director of Native American programs at Harvard, said it was helpful to hear from the students, parents and staff. Lavonne Honyouti, the advisor at Hopi High School for the Harvard-Hopi program, said she learned a lot from the program and thanks the parents for trusting her with their kids.