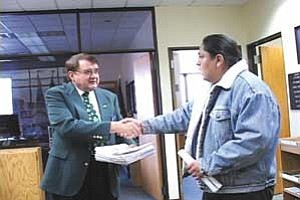 FLAGSTAFF -- On March 17, members of ECHOES and the Save the Peaks Coalition, turned in more than a thousand signatures Flagstaff Mayor Joe Donnaldson at FlagstaffCity Hall.

People all over the world, have joined in opposition to Arizona Snowbowl's planned use of wastewater to make snow on the San Francisco Peaks, a mountain that is holy to 13 Southwest native American tribes. While the signers of the petitions came primarily from Flagstaff and the greater Southwest, the rest of the signatures came from all over the world, from Alaska to Columbia even as far as France, Spain, Italy, Germany and Indonesia.

In a collaborative effort ECHOES, a grassroots organization based in Flagstaff, initiated a "Save the peaks" campaign, to stop the city of Flagstaff from selling wastewater to the Arizona Snowbowl for snowmaking.

Within recent years there has been controversy over how much the ski resort really contributes to the economy of Flagstaff. On one hand Snowbowl's independent study shows that it contributes about $20 million a year to the city's economy. However, the Forest Service's own environmental impact statement shows that Snowbowl is not a significant driver of Flagstaff's economy. Also the city BBB tax records since 1992 have shown that, Snowbowl's economic contributions are not as significant as previously thought. Despite record warmth and little snow this year, the local businesses have prospered due largely impart to accessible roads from surrounding reservations, whose residents contribute consistently to the economy of Flagstaff.

"This morning before sunrise we walked up to where Snowbowl wants to clear cut and make new runs," said Kelvin Long of ECHOES. "We prayed to the holy ones that the courts and the city will hear our pleas and help us in protecting our ways of life.

"It's the essence of indigenous life that we are protecting. This is something that the Mayor and the City Council of Flagstaff need to understand. We are willing to work with the city of Flagstaff in building a healthier community, one that does not put corporate and private business interest before the interest of people, and their way of life."

Pointing out that this is an election year for Flagstaff, Long said, "We need responsible representation that will uphold respect for the diverse cultures of this unique region, the environment and the quality of life that we enjoy."

Klee Benally of the Save the Peaks Coalition stated that "It would be remiss if the Mayor and City council ignored the pleas of its citizens, neighbors and people from throughout the world who are calling for respect, understanding and action on behalf of the religious and cultural practice of Native American Nations, the environment and community health."

In efforts to protect the San Francisco Peaks and maintaining the spiritual connections with sacred deities, ECHOES and the Save the Peaks Coalition and members of the Youth of the Peaks, went to the mountain just before sunrise on March 17 and prayed for blessings and protection for a religious connection that has been kept by indigenous practitioners since time immemorial.

"This mountain including the ski area is used for the spiritual ways of life and is a delicate ecosystem which is home to sacred deities and also where we gather herbs," Long said. "This is our church. We have used this area since time immemorial for prayers and if desecrated, will change the sacred covenant that we have with the creator."