Navajo film project to hold auditions across the Rez 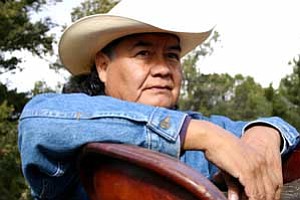 Courtesy photo On March 5, Razor Saltboy was in the Chuska Mountains near his home in Crystal, N.M. scouting locations for movie project of his stage play “Butterfly of Hope.”

CRYSTAL, N.M. — Navajo author, entertainer and playwright Ray Baldwin Louis, is working on making a motion picture of his published play, “Butterfly of Hope.” Louis, also known as Razor Saltboy is teaming up with his sons’ Production Company, Saltboy Films, to produce the film project. The play captures a time in the history of the Navajo people and America when Native Americans were displaced from their homeland to distant reservations in the 1860s.

Hondo Baldwin Louis is producing the project with his brother Kumen as casting director.

“We brought my father’s dramatic stage play to life a few years ago,” producer Louis said. “It was a terrific experience to see characters come to life. It has been our goal to make this and other stories into feature films. We believe the time has come for us to take that step. We’re excited about how the property is developing; people believe in the project. As more elements of the film come together, we hope to begin principal photography in August or September. Casting is going to be crucial for us.”

Saltboy is known throughout Native America as a singer and songwriter who has released three albums, but he has a vast amount of experience on stage as an actor and playwright. He has written more than 15 plays, many of which were produced on stage at Brigham Young University and through his own Pineland Theatre Productions.

Saltboy had a major role in the movie, “The Creator’s Game” which has been aired on Showtime. He has also writing credits for motion pictures such as “Indian” and “Geronimo.” Over the years, he has worked with many film productions including “Return of Billy Jack,” “White Line Fever,” “The Genius” and others.

The play centers on a story of a warrior and his family and friends on the run from the cavalry in 1863. They do not want to surrender so they hide in the mountains. The warrior struggles with his own demons, against a determined enemy, and trying to keep his people united.

The Navajo-speaking drama will feature an all-Navajo cast with eight-major roles and supporting cast of 22 others. The cast include three kids 8-12; 13 warriors 18-25; three young women 18-25; four men and five women 30-45 and two older grandmothers.

The story also calls for a cast of 10-15 extras for Mexican Ranchers and Calvary soldiers.

Saltboy said that the production team has been hard at work during the past six months gathering information to authentically portray the Navajo way of life around 1863.

“Although the original play was written about no specific tribe at the time, we feel that since we’ve transposed it to deal with Navajos, we want to incorporate the proper historical facts as much as we can,” Saltboy said.

Casting Director, Kumen Louis, who had the lead role in the play, said that casting will be a challenge, but is looking forward to making the project successful by finding the right people.

Casting calls for “Butterfly of Hope” are as follows: March 22 at Shiprock Chapter House from 8 a.m. until noon and in Crownpoint that afternoon at 2 p.m.

On March 23, it will be at Greyhills Academy High School West culture room in Tuba City from 8 a.m. until noon and Kayenta Chapter House at 2 p.m.

On March 24, it will be at Chinle Chapter House from 8 a.m. until noon and at the Window Rock Days Inn beginning at 2 p.m.