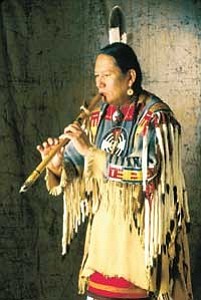 FLAGSTAFF--"Triumph" is the result of three years of hard work combining the talents of Maestro Randall Craig Fleischer and the Flagstaff Symphony Orchestra (FSO), R. Carlos Nakai, the Benally Family Dancers and the Northern Arizona University's (NAU) Preparatory Dance Academy. The skillful weaving of DinŽ and western classical dance, symphonic and Native American music was performed on the evening of March 10. Despite heavy snowfall, the 1,500 seats of NAU's Ardrey Auditorium were largely filled for the event.

"Triumph" is described as a contemporary Native American symphonic work featuring traditional Dine song and dance and Native American flute in an orchestral texture." The performance is the result of close consultation with Nakai and the Jones Benally family. Andrew Needhammer choreographed the NAU Preparatory School dancers.

"Triumph" is derived from the belief that when cultures combine lovingly, respectfully and creatively, the human race triumphs," Fleischer said.

"This is more than just a showcase for Native American music," Clayson Benally said. "The Dine culture has so many strengths, tellings of history, and Triumph is a fusion of classical and tradition. It's in a way telling that story through modern dance."

"We are adding to the story," Klee Benally said.

Work on the piece had its own challenges. There was a strong concern in all the participants that the DinŽ cultural aspects be appropriate for the venue.

"To collaborate on such a cultural level, we had to ask ourselves, 'what is appropriate to tell this story?'" Jeneda Benally said. "How can we tell this story without compromising our own culture?"

"Triumph challenges what is appropriate--finding the things that work and won't," Klee Benally added. "From my perspective, this is not classical or traditional, but integration of both--a product of us looking at each other and asking how we can work together in an appropriate way."

Fleischer, the Benally family and Nakai have worked together in the past, which eased their collaboration. As each spoke of the project and to each other, their mutual respect and genuine like for each other shone through--a fact further illustrated by the performance itself.

"We started writing whenever I was in town," Fleischer said. "They (the Benallys) came to my house in Los Angeles where Klee did magic tricks for my daughter, which she absolutely loved. I've worked with R.C. in the past. Once I had the first draft of the piece, I sent the music for the Native American Flute to R.C., who told me that much of it was unplayable on Native Flute. It has been an ongoing work."

Nakai laughed, indicating that even then, only days from the performance, that fine tuning continued.

Clayson said that continued work perfecting the piece was only natural for him.

"With our culture we had to learn to survive as Dine," Clayson said. "We are very adaptable--that process is elemental to our people, and that is what "Triumph" is about."

"Triumph opens as conflict between cultures, and illustrates an industrial conflict between the plains culture and the emerging industrial world," Fleischer said. "R.C. plays the role of a prophet--he's a higher spirit. The Native Flute has a serene quality--serenity vs. conflict. By the end of the piece, the hoop dance and music is the rousing triumph. It is an illustration of what results hen cultures combine through spirituality and respect."

"This is also a way to experience the symphony visually through the dance," Jeneda Benally said. "It illustrates a conflict and the unity that triumphs."

"It's another attempt to illustrate the classical tradition of both cultures together that is an understanding between worlds," Nakai said. "It's a real good attempt at bringing a further understanding of the instances of Native America itself--that we are part of a world community, all of us. None of us are locked into one culture or another -- we are members of a community of music without the politics of the spoken word."

The performance, Nakai said, was motivating and encompassed a great sense of what culture is about for Native Americans.

"Not a specific group," Nakai continued. "We are all born here. Not one is above the line. It's about all people being imprisoned by being taken away from our native culture."

The enthusiasm projected at Wednesday's breakfast did little to prepare for the actual beauty and impact of the performance itself.

The evening's program kicked off with the Symphony No. 6 in F Major, Op.68 ("Pastoral") by Beethoven. After a brief intermission, Fleischer tapped the symphony to attention and cued Nakai.

Movement 1 featured a duet between Nakai's flute and woodwinds from the orchestra. An orange disc representing the sun illuminated the backdrop behind the symphony. Suddenly the sun is pierced by the silhouette of an eagle opening its wings (Klee Benally), a bold introduction to Prep School dancers--a young man carrying a young woman in an eagle-like soar across the front of the stage. Soon, Clayson rises from the stage, in the personification of an eagle emerging from its nest and soaring into the sky to the chant of father, Jones, and the drum of Jeneda Benally. Finally, from a platform raised above the orchestra, Klee rises up to mirror the dance of his brother far below.

Fleischer described Movement 2--featuring a "Feather Dance,"--displayed rising tension from the original haunting trio of Native Flute and the flutes of the orchestra working into a musical "argument."

The entrance of the Feather Dancers provides a climax for the tension. The actual Feather Dance of the DinŽ is part of the Night Way Chant--dancers represent healers providing medicine to the patient. Noted artist Shonto Begay added his voice to that of Jones Benally.

The "Gourd Dance," representing the disharmony of native natural lifeways and the Industrial Revolution, was an amazing interweaving of the orchestra, Native American flute and the deep, seismic chant of the Benally family. Movement 3 represented the struggle, often violent, of two worlds--leaving both exhausted.

Movement 4 saw Nakai leading the transition from conflict to a triumphant sharing of cultures.

Three hoop dancers and three modern dancers share the stage in "a hoop dance the world has never seen before," Jeneda said.

Indeed, this performance was truly breathtaking. Repeated theme clashes led to a final crescendo where worlds come together in beauty.

As the performers returned to stage for a third bow, Klee and Clayson wrapped Fleischer in a Pendleton robe--a Native American honoring act.

R. Carlos Nakai (DinŽ, WeminuchŽ and A'shiwi) is an advisory member of the First Nations Composers Initiative (FNCI) and a board member of the American Composers Forum which heads the FNCI. The organization, Nakai said, seeks to pull together a compendium of Native American, Canadian, South American and other protectorates of the U.S. that would allow individuals to access to obtain specific information about native composers much like that used by filmmakers and media to find native actors.

This talented performer and composer of Native American flute music was originally trained in classical trumpet and music theory. A gift of a traditional Native American flute led Nakai to his first release, "Changes," (Canyon Records, 1983). Since that first offering, Nakai has released more than 35 albums--three of which feature Native American flute "in a classical setting." He has performed with many symphonies, including the Phoenix, Tucson, Saskatoon, Anchorage and Huppertal (Germany) symphonies. He has enjoyed seven nominations for Grammy awards, two gold records (sales exceeding 500,000) and has received the Arizona Governor's Arts Award. Nakai was inducted into the Arizona Music Hall of Fame in April 2005.

The Benally Family Dancers have traveled the world with a repertoire of over 27 DinŽ and intertribal dances. Jones, a world champion hoop dancer and traditional medicine practitioner, has lent his voice to film and music compilations and recordings. Jeneda, Klee and Clayson also perform as the award-winning band Blackfire.

"'Triumph' is an example of how the arts can be used to jog memories of native traditions and make a statement," Nakai said.

"Hopefully people will leave the event and think about the other cultures that live in our community and how they can be a bridge where we can come together, to develop respect and a working relationship in unity," Jeneda said.

"The performance will hopefully serve as a bridge for native communities and other people to gain an understanding of the symphony--a culture that seems so foreign to some of them now," Clayson said.

"It can serve as a platform to broaden horizons, to break cultural barriers," Fleischer added.

Recognized as a national leader in the area of symphonic-rock fusion, his first full-length composition, "Triumph," is indeed a triumph of perfect blending of two different worlds to Fleischer's credit.