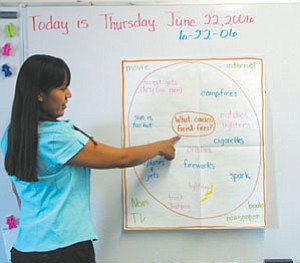 TUBA CITY — When new teacher Kimberly Beck was invited to present at the Tuba City Boarding School’s summer school collaboration series, she admitted to having butterflies in her stomach.

After all, here she was, just fresh out of college with less than a year of teaching experience, presenting to experienced teachers, including her mother, Pearl Beck, a kindergarten teacher.

When she was done drawing circles, squares and rectangles on the board, Beck’s colleagues gave her a hearty round of applause. But the real praise came when teachers began using “thinking maps” in their lessons.

Circles, squares, rectangles and lines make up charts called thinking maps. These visual maps support the natural thinking processes, enabling students to sequence, compare and contrast, classify and sort, analyze information and perform cause and effect reasoning. The idea is to use thinking maps to make mental processes less difficult with practice.

Dr. David Hyerle, an educational researcher, developed eight maps in 1988. They have been implemented in more 3,000 schools from New York City to Singapore to New Zealand in the past 10 years, according to Innovative Learning Group ILG, Dr. Hyerle’s organization. Schools across the country have credited thinking maps with raising reading, writing and mathematics test scores.

Beck showed that the maps can be integrated into any subject. She shared her students’ tree map writing samples. Tree maps classify and group words and ideas. She also introduced other maps: circle, bubble, double bubble, brace, bridge, flow and multi-flow maps, which support other problem-solving strategies.

Veteran teachers shared their success stories with the maps. Third grade teacher, Renae Whiterock, said her students got the knack of writing far quicker than other methods she had used.

Another teacher, Gloria Begay, said her students enjoyed math patterning with a circle map. She said using that map helped her understand the context of their math knowledge. Both teachers were very impressed with how productive and positive students can be when given tools to guide and build thinking skills.

Beck graduated from Arizona State University last December with a bachelor’s degree in elementary education. She will return to her teaching job in Tempe after her summer school stint ends — a school with a large number of English language learners.

She said she noticed that although her Tempe and Tuba City students have similar abilities, the Tuba students cited television or movies more often as their frame of reference. After teaching them to use tree maps in their writing, the children began using more descriptive words when writing and talking.

Beck brought her own style of teaching and shared ideas and practical techniques. She encourages mistakes in the learning process.

“Building kids’ self-confidence and thinking skills are the keys to their success. When they correct their own mistakes, self-confidence grows. You just have to give them learning tools. Music, too,” she said, as her students wrote to the soft sounds of a Haydn symphony.

John McDonald, summer school director, stated that it was a special treat to have a former Tuba Boarding student return as a teacher and presenter. He said students and staff benefited from Beck’s passion and enthusiasm for teaching. He said, “They know that if she can succeed, so can they,” he said.